Man: Doctor, my cock is too small for sex.
Doctor: Try using your hands too wiggle it about.
Man: I can't.
Doctor: Why not?
Man: I need them both to hold its legs to stop it escaping !!!

A man complained to his friend "My elbow hurts. I better go to the doctor." "Don't do that," volunteered his friend "there's a new computer at the drug store that can diagnose any problem quicker and cheaper than a doctor. All you have to do is put in a urine sample, deposit $10, then the computer will give you your diagnosis and plan of treatment." The man figured he had nothing to lose so he took a sample of urine down to the drug store. Finding the machine, he poured in the urine and deposited the $10. The machine began to buzz and various lights flashed on and off. After a short pause, a slip of paper popped out on which was printed: You have tennis elbow. Soak your arm in warm water twice a day. Avoid heavy labor. Your elbow will be better in two weeks That evening as the man contemplated this breakthrough in medical science, he began to suspect fraud. To test his theory he mixed together some tap water, a stool sample from his dog, and urine samples from his wife and teenage daughter. To top it all off, he masturbated into the jar. He took this concoction down to the drug store, poured it in the machine, and deposited $10. The machine went through the same buzzing and flashing routine as before then printed out the following message: Your tap water has lead. Get a filter. Your dog has worms. Give him vitamins. Your daughter is on drugs. Get her in rehab. Your wife is pregnant. It's not your baby - get a lawyer. And if you don't stop jerking off, your tennis elbow will never get better.
W

Father's Day has become too commercialised.
We've all forgotten the true meaning of walking from room to room, turning off lights & tutting.
Not to mention turning taps off, shutting cupboard doors and locking the house at night.
And bellowing up the stairs: "Turn that bloody row down! You call that music?"
In the music bit, alas I have become my dad. Kids don't have music they have noise.

I too have turned off more devices in our house, than an Indian doctor on a Covid ward.
G

I named my tree 'Spruce Jenner.' It's a transplant

A New Zealand guy was washed up on an isolated island after his boat sank following a severe storm, and, came across a dog and a sheep who would be his company for the time being, until he might be discovered by anyone and rescued.
He was there for weeks on end, and, after a while he started to have sexual feelings towards the sheep, but every time he tried to make advances there,the dog would start barking and force him away.
This continued endlessly until one day ,out of the blue,a beautiful Scandinavian young blonde found herself on the same island having been washed up there also.
The New Zealander couldn't believe his luck even though he longed to be rescued by now,and,explained to the Scandinavian girl what had happened to him ,and, how long he had been there with no rescue in sight,and that he only had a dog and sheep for company.
She resigned herself to the same fate,though relieved to have survived her own personal tragedy.
On their first night together he looked into her eyes and said to her quietly "I know you have only just arrived here and I have been here for so long now but I need to ask you something which would mean so much to me"
The blonde moved closer towards him and said "I understand ...what would you like me to do ?" and he then replied "Is there any chance you could take the dog for a walk ?" 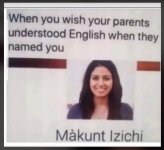 I'm suffering today after doing the Dairy Milk pub crawl last night - I had a glass and a half in every bar.
W

WOMAN'S POEM
Before I lay me down to sleep,
I pray for a man, who's not a creep,
One who's handsome, smart and strong.
One who loves to listen long.
One who thinks before he speaks.
One who'll call, not wait for weeks.
I pray he's gainfully employed,
When I spend his cash, won't be annoyed.
Pulls out my chair and opens my door,
Massages my back and begs to do more.
Oh! Send me a man, who'll make love to my mind.
He knows what to answer to "how big is my behind?"
I pray that this man will love me to no end.
And he'll always be my very best friend.
MAN'S POEM
I pray for a deaf-mute nymphomaniac with huge boobs who owns a liquor store and a golf course.
I know this doesn't rhyme and I don't give a monkeys.
W 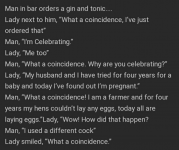