Barry K O Bama said:
Apparently there are 400 Challenger 1 tanks in storage in Jordan and some more in Oman

Perhaps they should consider preparing these for delivery

Chances of them ever being refitted are slim to none like the Spanish Leopard A4s. Tanks that have been mothballed rarely ever make it back to action, cheaper to build new tanks.

Stacky said:
Only 1 year ago Vladimir Putin was planning on having Russian tanks quickly in Kyiv.

In fairness Russian tanks were paraded through Kyiv

good article about why Scholz is a ditherer and dallier.

From some comments on Scholz's (delayed) decision on tanks, some MiG29 topic came back.
This was a rumour big time on specialist boards and media, when Germany refused backing up giving jets to Ukraine. I believe, that with Germany position on tanks, German government was worried this time it will happen with Leos as it worked well with jets and now not only PL declared 'finding an alternative way for providing tanks over to Ukraine'. A bit from the article in one of reliable daily papers:

Scholz, while boasting about Germany's historic role in supporting Ukraine, also forgets that already last spring Poland, for parts - after a big brawl over whether and how to transfer planes - delivered a "certain number" of MiG 29s to the Ukrainians. Only, by the way of - let's call it conventionally - combined. After all, a fuselage or wings is also a spare part, DGP sources in the Polish government commented.

But let's leave the bidding on who and what was handing over to Ukraine. Let's focus on Scholz. The Chancellor's ranting about Germany's historical role is acting as rationally as possible from Berlin's point of view. One simply has to know at what point to join the success story. And the head of the German government has good intuition in this matter. Tanks are offensive weapons that will be used by the Ukrainians to break the land corridor connecting occupied Crimea with mainland Russia. Which will be the real beginning of the end of the war.

and for some laughs: 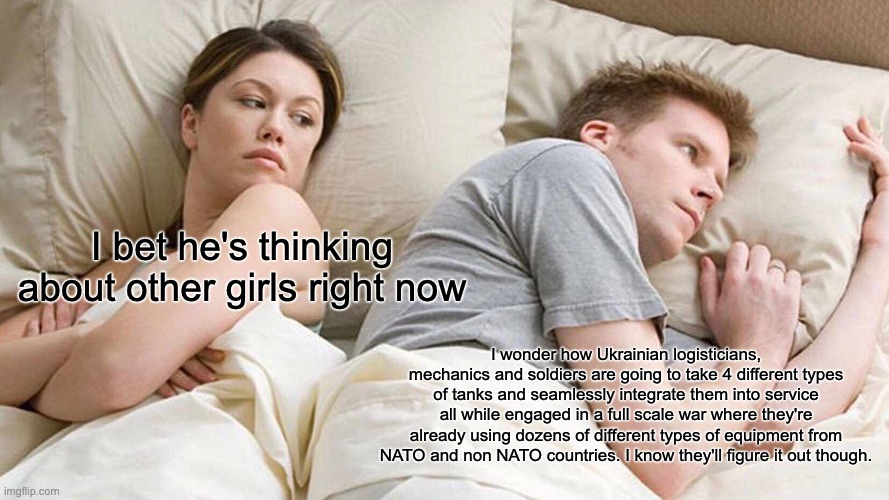 not sure if you heard the news, but yesterday ru shot at the ship under the Turkish flag in Kherson area.
So that is how 'ru is trying to please Turkey as they are friends and Putin wants to foster great relations between those nations'

Drucker said:
In fairness Russian tanks were paraded through Kyiv

A bit harsh - she's not THAT big
S

good article about why Scholz is a ditherer and dallier.
Click to expand...

Ditherer and dallier you say? I wonder if they ever did an article on a particular Irish politician

Some good read on potential estimates of russian loses, this is the first part on sources:

Some graphs from it: