Back when I was a poor Aussie backpacker, I picked up a gig, firstly as Pete the Penguin on Fota Island as a mascot for the ice rink. I look back fondly on the beatings I copped from boys aged between 8 to 14 who thought a penguin needed a kicking. I found out the hard way flippers were no good for defending yourself. For some reason the owners of Fota On Ice decided I would make a good Santee, even though I was a skinny bastard. They had one Santee already but with a 2 hour wait to see him, they realised they needed a back up. So about 3000 Corkonian kids whose parents paid 14 euro per child, got ripped off by seeing me, a skinny Aussie with his Polish housemates pillows gaffer taped to his guts, dressed up as Santee. Now I have kids of my own, I realise I have no photo's of my time as a Fota on Ice Santee to show them in future. I am asking if anyone has photo's from 2003 at Fota on Ice with a Santee that has brown shoes (They asked me to buy black shoes but being a tight arse backpacker, I just wore my brown hiking boots) to share with me. It was one of the best experiences of my life and would love to see some memories. 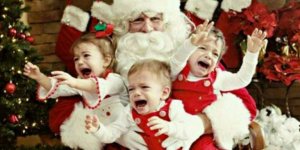 That is not to far off the truth. Kids scared shitless of me.