1. We Are Cork. We Are Science.
Gregory Tarr won the Young Scientist Competition for his project on detecting deep fakes on the internet. Pushing Cork to the top of the competition’s role of honour with his victory, the Bandon genius has secured a million-euro investment to turn his work into a fully fledged multi-billion euro business that might eventually be worth more than Amazon, Meta, Apple and the PROC put together. Well, let’s not put too much pressure on him, maybe the first three anyway.


2. Outdoor Dining Heaven
While businesses and local authorities in other cities and towns were still fighting it out over the pedestrianisation of streets, Cork was miles ahead - doubling down on last year’s efforts to create over 1,000 outdoor dining spots in the city centre alone. The quick moves by city council earned Cork a reputation as the outdoor gatting and dining capital despite that covid langball still hanging around. Saved plenty of pubs and cafés going bust too.


3. Same Sex Parents ‘First’
In Cork, we’ll shout loud about any ‘first’ and this year Niamh O’Sullivan and Geraldine Rea became the first same-sex couple to have both their names on their twin babies’ birth certificates. Beaming from ear to ear in a cute family photo with their newborns, most Cork parents looking on couldn’t help but shudder slightly thinking ‘let’s see how smiley and fresh this lovely young couple are when they’ve changed a thousand nappies!’

4. CHASE Win Case Against Incinerator
The prize for the most gruelling legal campaign against a manky thing being built in their neighbourhood goes to Cork Harbour Alliance for a Safe Environment (CHASE) who won a string of high court victories in their efforts against preventing a waste incinerator being built in Ringaskiddy.
Already surrounded by pharma plants spewing waste into the air and sea, these Rebels are far from a clichéd middle-class NIMBY outfit, - they are a teak-tough model for any community group who want to stand up to the Dublin government and big business.

5. Cork Going Down The Tube
We didn’t know we needed a tubing park until we got one this year at Smuggler’s Cove in Rosscarbery. You’ll be glad to know that it’s the first one in Ireland – which will probably motivate plenty of us to try it out purely so we can boast about it to our ‘friends’ up the country. We’d better start an All-Ireland Tubing Championship quick so we can win it and brag about that too.

6. A Daycint Summer
Long sunny days at our beautiful beaches, endless nights of outdoor dining and copious amounts of lashing back cans at the Lough: Mother Nature didn’t just play ball this summer, she stuck it in the back of the net like that Jack O’Connor screamer against Kilkenny. With the pandemic, if we had one of her manky rain-filled summers, it might have sent us all over the edge.

7. Air We Go!
Next time your plane is about to land at the airport, close your eyes and give thanks for the smoothest runway in Ireland as it touches down and glides along the silky surface. On time and on budget, Cork Airport easily wins the inaugural All-Ireland ‘Runway of the Year’ Award. What a time to be from Cork.

8. Tadhg Hickey’s Sketches
Many of the popular Cork comedian’s satirical takes on political conflicts such as Israel-Palestine are played out as a house share in Cork. His popularity soared during the pandemic, gaining Hickey a big national and international social media following without appearing desperate for attention - unlike some of his comedy contemporaries. His recent ‘Cork Mindfulness App’ sketch was his best so far and is compulsory viewing for PROC readers. He completely denies being the person who writes this column.


9. Event Centre Construction is Finally Underway
Of course it isn’t. Instead, we got robot trees and despite looking like a huge set of super-posh Scandinavian-designed surround sound speakers it seems they’re only interested in sucking in air and not belting out deep house bangers. Pity, an outdoor nightclub on Pana is just what this covid-riddled city needs right now. 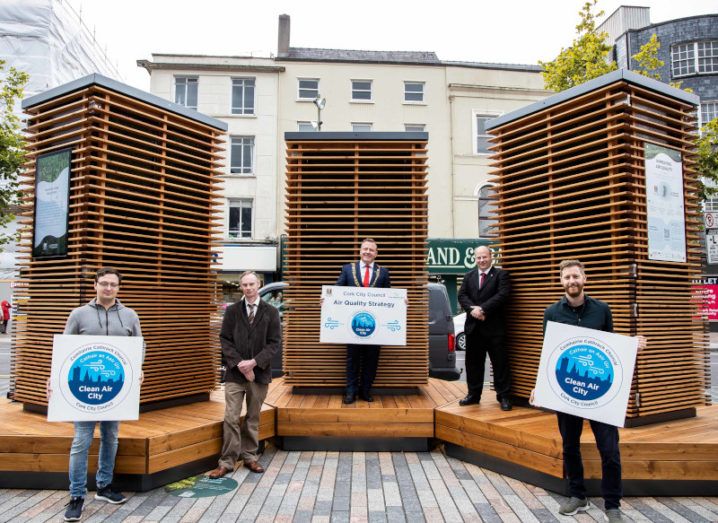 10. The Jazz Festival Actually Happened
There were times during the jazz festival as you bopped away to some yank playing a saxophone horn in a busy bar, that you thought somebody in a hazmat suit would surely ride in and shut the whole thing down. After Turner’s Cross Mick’s no-craic laws put an end to big live music gigs for over a year, the Jazz Festival was a Cork moment even the most self-confessed jazz-hater needed.