RebelBhoy said:
A pair of absolute dicks in this video.

Supporters are so far remote from players already this sort of fuck arsery will mean its impossible for joe soap to get near their heroes for fear of some little bitch pulling a stunt like that.

As a member of the minority community in the North of Ireland, Laffterty would do well to shut his stupid mouth.

But it's ok when you do it.

From a Europa League final six months ago to currently breaking the record for worst ever Champions League performance - 0 pts and -20 goal difference.

45 mins to save their blushes.
M

CORKBHOY said:
From a Europa League final six months ago to currently breaking the record for worst ever Champions League performance - 0 pts and -20 goal difference.

And its a wrap. 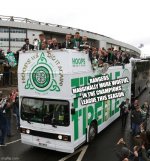 Best of luck to Man Utd in the Champions League tomorrow night.


Who are they playing?

He's probably bored. Its Champions League night and he has nothing to do.
S

Minstrel said:
And its a wrap.

And even according to an ex-Ger Gordon Dalziel TRFC were extremely lucky to lose only 3-1 last night - one goal chalked off for an off-side that most likely wouldn't have been ruled out by VAR domestically where apparently "there must be a clear gap between the VAR lines".

Their fall from grace has been as surprising as it has been meteoric. Bit of a perfect storm though. As well as injuries, they sold two of their best players, and thanks to their debts they couldn't replace them. Kolac has been a good signing as a penalty box finisher but against better opponents in Europe he's not one to hold the ball up, and El Gruffalo is out of sorts and out of shape. At the back while McGregor is decidedly on the wane their back up keeper showed he's not up to it, and then there's "Captain Fantastic" Tavernier who is decent going forward but just doesn't have the discipline to defend. I'm told he was exposed a number of times with many of the Ajax attacks coming down his side.

All in all it's not been good a good couple of weeks for Wee Gio and his team have been booed off the park for their last 3 home games by those who bothered to stay. There's much unrest amongst their support with many/most? now calling for Wee G to be replaced. Question is who'd replace him, and what kind of a budget would they have in The Rangers FC's current parlous state.
K