jimmym said:
I am making that point about mortgage holders for weeks now,
Couple A happy to rent 150k income get a month rebate
couple B With 20 years left on a mortgage combined income of 50k get nothing,
Absolutely crazy,

But but but FFG alphabet soup.

Oh, and something about Leeks.

So SF is the best.
D

This is the guy, remember, who decided it would be a good idea to let fireworks off in his bathroom back in October, and who apparently thought it was a good idea to dress up in a Santa Claus costume over Christmas and go out into the street handing out money to passers-by.
Well, this week’s Super Mario rumour, catching fire on Twitter yesterday, is that the Italian pulled into a petrol station the other day and told the cashier he’d pay for everyone’s fuel.

Another bonkers promise it that somebody earning 20k and living at home with their parents
would get a 500 eu cash payment,

Only Sinn Fein in government can solve housing 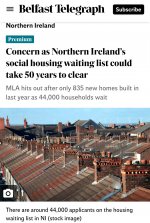 
The sooner she focks off on permanent maternity leave the better.


The sooner she focks off on permanent maternity leave the better.
Click to expand...

^On point, FG can't even get justice right, I predict the second spell of Leo spell as Taoiseach will end in a total car crash. They need a long period in opposition, and we need a break from them.