Is this 'Bitcoin' the real deal?

It's a good investment, very sensible, will definitely pay off.

Or not. Who knows?

I think Bitcoin will remain a supported pyramid scheme.

The new Ethereum looks very interesting though, with the shift to proof of stake.

It addresses a number of the fundamental problems with crypto currencies and means that they might start actually being useful.

Morgan Stanley: "Systemic spillover risks of crypto weakness to the fiat banking system currently appear limited, as the leveraged crypto companies have generally borrowed from each other." 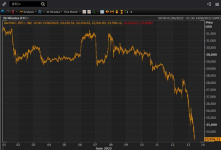 Corks finest said:
Pyramid scheme is what it is( crypto and one of Corks best known DJs/ radio personality is a big fish in several)
It’s a scam and a close friend is after being caught in it
Famous for his wind ups ( Dj chap)
Click to expand...

That is hardly still pulling in suckers?
H

Browser Brody said:
It seems like they are only being used as an investment and for speculation purposes at the moment as opposed to being utilised for the purpose they were designed for .

I have crypto for the last 5 years and have never bought anything with them .
Click to expand...

You used the word Investment.

If anything, scratch cards are more predictable as there's rules around the probable rates of return.

But that's not to say that Bitcoin, like scratch cards, doesn't have its uses and value...

I really think the "Currency" term in cryptocurrency is the problem. They're not really currencies, certainly not how they're used today.

Once again, I have to caveat that, there are some potential interesting use cases.

There was an interesting interview with Marc Andreessen recently. Bit tech bro but this bit in particular struck me as a useful way of thinking longer term about crypto:

So, this permissionless capability is still there. It's still incredibly important and powerful. It's still a big contrast versus the status quo. And then--it's the thing that caused the internet to win. It's the reason the internet won and the reason nobody remembers all the prior networks anymore--other than me--is because the internet won, because the creativity that got unleashed by permissionless innovation meant that you had a million times the intellectual candle-power going into creating all of the use cases and all the great things for people to do. Those included all of the big internet businesses that we know today and all the things we like to do online.

So, what we had is: we had a decentralized, permissionless network of data but without trust. And, this is sort of, again, the internet's famous for this. There's no trust. Like there's no--it's the famous thing: On the internet nobody knows you're a dog, right? The famous cartoon. Which is there's no sense of trusted identity on the internet.

By the way, core internet services like email really ought to have a built-in method[?] of money. There's still no built-in concept of money so there's these huge incentive problems.

So, for example, spam. The reason spam is a perpetual problem with email is because of the economics of spam. It's free to send a billion emails. If you only have a 0.0001% conversion rate on the people that you're trying to trick, it's still cost effective to run a spam campaign. If we had had micropayments on the internet from the beginning--if we had had internet-native money from the beginning, we would've had a system where sending an email would've cost, let's say, a thousandth of a cent. So, from a consumer's standpoint, nobody ever would've noticed or cared if you spent a penny a day or whatever to send all your emails. But, it would've killed the spam industry, like, right out of the gate. We never would've had the spam problem.

Like, there should be internet-native versions of all of those things. And, that's basically what this sort of Crypto Web3 revolution is now, in my view, is it's sweeping back in 30 years later and basically saying: Okay, now we finally have the technologies to be able to basically drop a trusted environment, a trusted architecture, in place on top of the un-trusted aspect of the internet; and all of a sudden have a trust environment in which everybody globally can do business and can transact in a way that is trusted and clear and straightforward. And, then again, globally ubiquitous. Just like the internet, globally ubiquitous. Anybody on planet earth can participate in this. And, that's why we get excited about this.
Click to expand...

So the way I think about this is there are ways of evaluating cryptocurrency projects, based on factors such as:
If the answer to all the above is no, then you've got something very, very interesting.

If no, then it's probably just another pyramid scheme + money laundering.
S 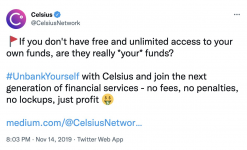 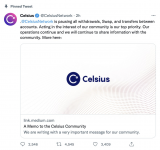 Orchard thief said:
A friend of mine turned €16k into €12m and cashed out. Put it all into property. Had zero clue what he was doing just found himself in the right place at the right time. Even he doesn’t understand the fuckin’ thing.
Click to expand...

Probably got great advice from his son
H

Wow, I've really only been paying attention to the Bitcoin price because laziness.
Bitcoin is down from a peak of $67k to $24k today. Which is a good bit (64% drop by my count), a level last seen in Dec 2020.

I mean. you still have the insane position of a joke coin still being "valued" at $7.5 billion.

Corks finest said:
Banners brokers is long long long gone This is an “ investment plamas “ That the dj has been involved with over a year Purportedly earnings of 10 k per month between 3 guys Also involved briefly with another one that just crashed a few days ago Leaving over a 100 Limerick folk out of pocket ( Limerick alternative ‘medical’chap main actor down there) It’s all totally a ponzi / pyramid scheme
Same group of greedy individuals involved in crypto up to last year
This investment gang are mainly Indian- Brazilian and one American lady was actually jailed for fraud previously and incidentally was a major player in the one that went belly up v recently
Click to expand...

Paulie Mac was on the 2 Norries Podcast over the weekend.