Does anyone on here drive an Electric Vehicle??

slick fingers said:
what grass grows in winter? I hope not to cut my lawn till next march!
Click to expand...

Ah, so your lawn dies in winter?

And with regards temperature:

Solar panels do not need direct sunlight in which to work efficiently. They can work just as efficiently when daylight only hits them. Yes they do lose some power on a grey overcast day, but they will still be producing energy as it is daylight outside.

We do tend to think that solar panels are going to work very well on a blistering hot summer day. Surprisingly this is actually not the case. Solar panels will lose efficiency in temperatures above 30 degrees. The cooler weather actually suits them better.

As long as they have daylight they can remain very efficient at producing energy. Solar panels are also built to withstand a British winter and are very hard wearing meaning they will not be damaged by cold temperatures, wind, rain, ice or snow.
Click to expand...

Again, you would think that when it is snowing the solar panels would not work efficiently. Panels will possibly lose some power generating capacity when the snow is actually falling as it tends to be very cloudy at this time. When the storm has cleared and you are left with snow on the ground this can actually encourage the panels to work better.

The added reflection coming from the snow on the ground will cause more light to fall on the panels, especially when the sun comes out onto the snow. Snow cover over the panels is usually not a problem. Thin layers of snow cause no problems at all as the light can still get through. Solar panels are frequently assembled onto sloping roofs meaning the snow will slide of the panels much faster than it will of the roof.

The snow will also slide of quickly due to the fact that the panels retain some heat inside and this will cause the snow to fall off. In the case of very extreme snowfall it is possible that the panels shut off altogether and do not produce any electricity. However, the snow will soon go from the panels on its own or if it is safe to do so you may remove the snow by hand. All in all solar panels work very well in cold weather conditions.
Click to expand... The sun could be the world's largest source of electricity by 2050, according to a report issued on Monday by the International Energy Agency (IEA).

According to IEA, solar photovoltaic (PV) systems could generate up to 16% of the world's electricity — overtaking fossil fuels, wind, hydro, and nuclear energy — in a little more than three decades.

In photovoltaic cells, silicon electrons absorb energy from light rays, which is converted into electricity. These are different from thermal solar panels, which generate energy by heating up water.

“Negative pricing” moves, as they are known, are not uncommon. But they are only supposed to happen at night, when most of the population is mostly asleep, demand is down, and operators of coal fired generators are reluctant to switch off. So they pay others to pick up their output.

That's not supposed to happen at lunchtime. Daytime prices are supposed to reflect higher demand, when people are awake, office building are in use, factories are in production. That's when fossil fuel generators would normally be making most of their money.

The influx of rooftop solar has turned this model on its head. There is 1,100MW of it on more than 350,000 buildings in Queensland alone (3,400MW on 1.2m buildings across the country). It is producing electricity just at the time that coal generators used to make hay (while the sun shines).

The impact has been so profound, and wholesale prices pushed down so low, that few coal generators in Australia made a profit last year. Hardly any are making a profit this year. State-owned generators like Stanwell are specifically blaming rooftop solar.

The truly scary prospect for coal generators, however, is that this equation will become economically viable in the big cities. Investment bank UBS says this could happen as early as 2018.
Click to expand...

-And that was before the Cambridge breakthrough, so the pace will be quicker and price cheaper once those panels go into mass production.

Be serious, Electric car? We are light years away from anything that compete with internal combustion engine, tired of listening to nutter who THINK they are green minded. Like wind turbines the greatest hoax of recent times. I never get tired of giving the real data to people who have been misled by Governments data regarding green technology. We are no further on with 'Electric car' than the Sinclair C5.
B

Colkitto said:
Be serious, Electric car? We are light years away from anything that compete with internal combustion engine, tired of listening to nutter who THINK they are green minded. Like wind turbines the greatest hoax of recent times. I never get tired of giving the real data to people who have been misled by Governments data regarding green technology. We are no further on with 'Electric car' than the Sinclair C5.
Click to expand...

Ya, you're right, an electric car is a pure pipe dream... 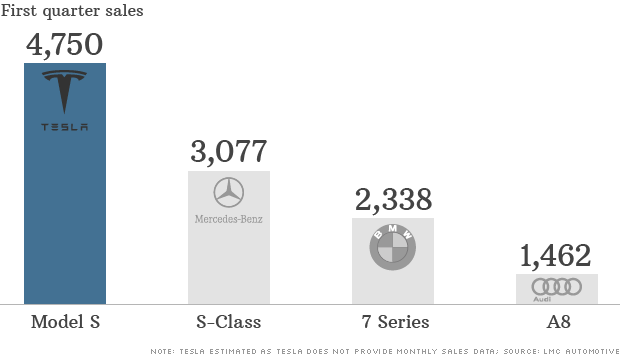 You know the Tesla Model S, the $70,000 (and-up) electric car that "nobody can afford"? Well, evidently, more than a few people can afford it.
In fact, in the first quarter of this year, more people bought a Tesla Model S than bought any of the similarly priced gasoline-powered cars from the top three German luxury brands, according to data from LMC Automotive. About 4,750 buyers bought a Model S while just over 3,000 people bought Mercedes' top-level sedan.
Click to expand...

I mean it's light years behind combustion engine because it's so new... I mean what was the first thing could run on battery power reliably and how long ago was it... The Curious Lozenge said:
utter nonsense. if you know anything about fossil fuels you know that's absolute rubbish, perpetuated largely by the oil industry themselves.
Click to expand...

As I said, it depends on what source you use. Other estimates state that by the 2050s there will be <10% of worlds oil will have been used.
A

The Curious Lozenge said:
where do you think the electricity comes from?
Click to expand...

It comes from big dirty fossil fuel power stations a lot of the time. But far less fuel is used to generate the electricity to power an electric car than put into the tank of a regular car.
B

antipop said:
It comes from big dirty fossil fuel power stations a lot of the time. But far less fuel is used to generate the electricity to power an electric car than put into the tank of a regular car.
Click to expand...

Here's where it gets confusing, yes and no, it depends how much power is lost in transmission, in Ireland that's quite a lot in most cases. As I've said though as solar takes off this (the amount of power created by burning fossil fuels) will decrease so you're still going to be helping the environment by buying an elec car.
H

Blueswannabe said:
Ya, you're right, an electric car is a pure pipe dream...

I mean it's light years behind combustion engine because it's so new... I mean what was the first thing could run on battery power reliably and how long ago was it...

presume that's in California.
B

US, unless you're on about the U-Boat, not sure where that is tbh.

Sales in Europe for EVs is underwhelming but still growing year on year.

Solar power is not reliable enough on these isles, regardless of technology. Without large scale storage that can get us through a month. And there's nothing that can do that right now.Like Fetch, it's not going to happen.
Nuclear is the only sustainable zero carbon option. As long as Ireland rejects this fact, EVs are not the solution
S

We should just go back to coal really.

Loads of it left and the Indians and Chinese can't get it out of the ground fast enough.