PROC Guide to Arguing About the Panaban on the INTERNET

‘See you in 7 Years, You Pricks’ – Says Dolphin Head 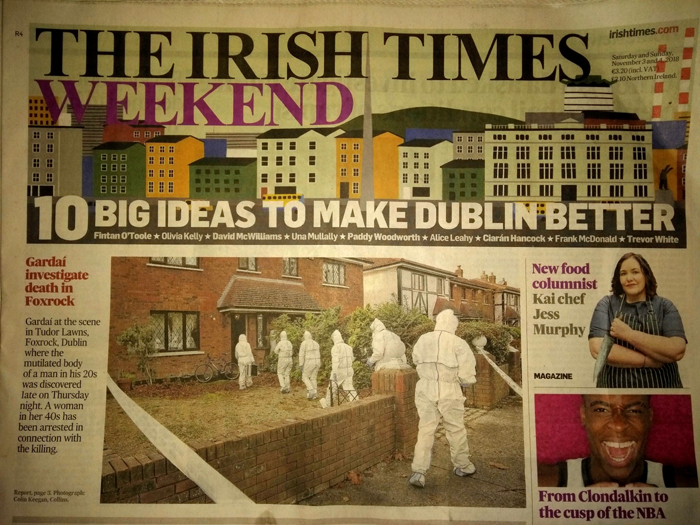 10 Ways To Make Dublin Better
Last weekend Dublin newspaper The Irish Times published an entire supplement called “10 Big Ideas to Make Dublin Better”. Unfortunately our thoughtful and well considered suggestions were omitted due to the newspaper’s anti-Cork bias, but luckily the lizzards who control the INTERNET have agreed to allow us publish the ones that don’t involve uranium and a box of matches…

1. Bulldozers and Wrecking Balls
It would be impossible to make Dublin “better” without demolishing most of it so there needs to be huge investment in bulldozers, wrecking balls, power drills and dynamite if it’s to have any chance of imitating the nirvana that is Cork.

Entire Dublin suburbs need to be levelled and their inhabitants moved to islands off the west coast. To speed up the process, renewal grants should be paid to Dublin families willing to kango hammer their own house to the ground and the rubble can be shipped with them to the west to create a new hut.

2. Put the army on the streets and give them lasers
Time to turn off the Xboxes and haul these lads out of their barracks and on to the streets of dirty aul town to put some manners on those inflicting the city with crime and chaos. Lasers that instantly evaporate a target would help control street crime – the threat of being vaporised for dropping your chip wrapper is the level of threat required if Dublin is to have any hope of getting itself in order.

3. Ask the Brits if they’d swap Dublin for Norn Iron
With a Brexit deal still looking unlikely the government need to start thinking way outside the box. Would the Brits take Dublin in exchange for the crazy sectarian state of Northern Ireland and its divided capital city, Hellfast?

London would be delighted to get the reoccurring nightmare of the six counties off their plate and the rest of us outside of Dublin would be happy to see as hard a border as possible around the M50 – preferably one made of a twenty eight mile long, twenty foot high mountain of used syringes.

4. Close down O’Connell Street
It’s supposed to be the capital, and consequently Ireland’s, main street but it is a mortifying embarrassment of fast food restaurants, tourist tat shops and hoards of roaming drug addicts - looking more like something from a zombie movie than the nation’s urban showpiece. It needs to be closed down completely or blown up. Again.

5. Dig a hole around the M50 and send Dublin out to sea
It might be costly but given that Dubs complain about it so much how about digging up the M50 and sending it to other parts of the country where it would be appreciated? The void left behind could flooded and with a bit of luck Dublin might float like a stinking turd and the prevailing south westerlies might blow it across the Irish sea to become a another classy suburb of Liverpool.


6. Force the Dubs To Change Their Accents
Both Dublin accents grate heavily on different parts of the brain and must surely have a dramatic effect on the day to day mental health of Dubs themselves speaking and listening to each other all day. One is the linguistic equivalent of a vuvuzela and causes stress in the frontal cortex of those who can hear it, while the other sounds like an out of tune door bell and impacts directly on the soul. Eradicating both with compulsory speech and language courses would greatly improve The Pale.

7. Ban Bicycles
Bitcoin might be in vogue among sophisticated international criminals but Dublin’s petty crooks still use bicycles as their currency of choice with more bikes nicked in Dublin every second of every day than the rest of the world in a whole year. Ban all two wheelers immediately and force cyclists to walk or take the bus – encouraging them to pad lock their shoes to their feet so the crims don’t try to pilfer them when they sit down outside some café for a smackachino.


8. Curfew for anyone wearing tracksuits
Most of Dublin’s crime is committed by men in tracksuits. Banning anyone wearing sportswear from leaving their homes, except to go to the chipper for breakfast, lunch and dinner, would significantly reduce assaults, robberies and drug dealing. It would also put a handy dent in their Gaelic football prowess.

9. Ban Foreign Investment in Dublin
Multi-nationals looking to start or expand an Irish operation should have to do so outside the capital where their employees won’t have to share a bedroom and sewage pit with forty other people or take up residence in a burned out cement lorry in the middle of a green in an estate in Tallaght.

10. Repatriate Corkonians
As Dublin slides further and further into a chasm of crime and chaos with only fanciful broadsheet articles attempting to address it, it may be time to repatriate all Corkonians living there, with the exception of George Hook, for their own safety. They will be much more appreciated back home on Leeside where they will receive compulsory retraining for employment in the pharma industry who will do anything (and we mean anything, feen) to fill vacancies.