Hank Scorpio said:
He is in his hoop.

He has piled on the weight in the last few years, walking heart attack.

Don't let him hear that you find him boring, it'd make him Ang Lee. You wouldn't like him when he's Ang Lee.
B

Hank Scorpio said:
He is in his hoop.

He has piled on the weight in the last few years, walking heart attack.
Click to expand...

The daily Brexit "Sunlit uplands" update from the Daily Telegraph: 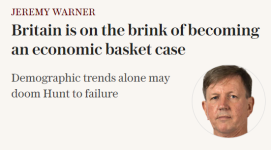 Britain has now dropped from the 5th largest exporter in the world to the 14th over the past six years.

This; maybe it's dawning on them??

It’s over. The Brexit debate has finally finished. The Conservative Party – the party in charge of Brexit – have effectively admitted that undoing Brexit would help to fix the UK’s economic crisis. With millions of people suffocated by poverty, and gasping for air, our government is proudly holding our heads under water.

February marks seven years since the B-word infected every political discussion in the UK. There’s a reason why it split families and ended friendships. Both sides considered themselves to be saving the British people from catastrophic harm. Why was that?


It’s because major politicians and journalists painted Brexit as the way to save the UK from poverty and tyranny under the EU. In 2016, Rishi Sunak told us: “If we leave the EU, we will immediately save £20bn.” Now, his government’s economists say it is costing our economy £100bn a year (4 per cent of GDP). Sunak also told us Brexit would “enhance our position as a dynamic, outward-looking trading economy.” But last March, he admitted that Brexit is “a big part of the reason why” the UK’s trade exports are lagging behind similar countries.


This month, the prime minister said growing the economy was his top priority after tackling inflation. And in November, Jeremy Hunt – the person he put in charge of the economy – said rejoining the EU’s single market would improve growth. It’s also important to remember that the £100bn loss estimated by the government’s Office of Budget Responsibility (OBR) equates to about £40bn in lost tax revenue. That’s money that the government could be spending to help people with their energy bills. They could also use it to pay the £18bn needed to pay public sector workers in line with inflation, ending the strikes – and getting our economy and NHS up and running.

Chancellor Jeremy Hunt has known this for a long time. In 2016, he tweeted: “NHS funded through tax revenues that would disappear following Brexit, price paid by poorest and most vulnerable.” And now the Nuffield Trust has just published a study showing that Brexit is damaging the NHS, and the Bank of England recently confirmed that it has
D

I don't think they should be allowed to rejoin. They can wallow in their deceit, ignorance, arrogance and corruption. Fcuk em.
B

Give em a Sweden type deal. Pay in and no decision making.
D

Bandon Langer said:
Give em a Sweden type deal. Pay in and no decision making.
Click to expand...

Switzerland?
Sweden is a full member of the EU
B

That's too good a deal for them.
Give them the same as Belarus.