War propaganda failed to conceal the horrific slaughter of the First World War, so with declining recruits the British government agreed a Military Service Bill to extend conscription to Ireland. Four days later April 20th, 1918 a unique meeting held in the Mansion House Dublin brought together an alliance of Trade Unions, Labour and Nationalist workers, and the Catholic Church, to support a General Strike as part of a campaign to oppose conscription and imperialist wars. Many historians now suggest that after the 1916 Easter Rising, the 1918 Anti-Conscription Campaign, created that necessary radical image for Sinn Fein that resulted in their success at the Westminster elections.

How big a part did this play in turning the table on the British? 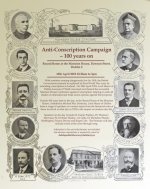 The Irish made the best cannon fodder.