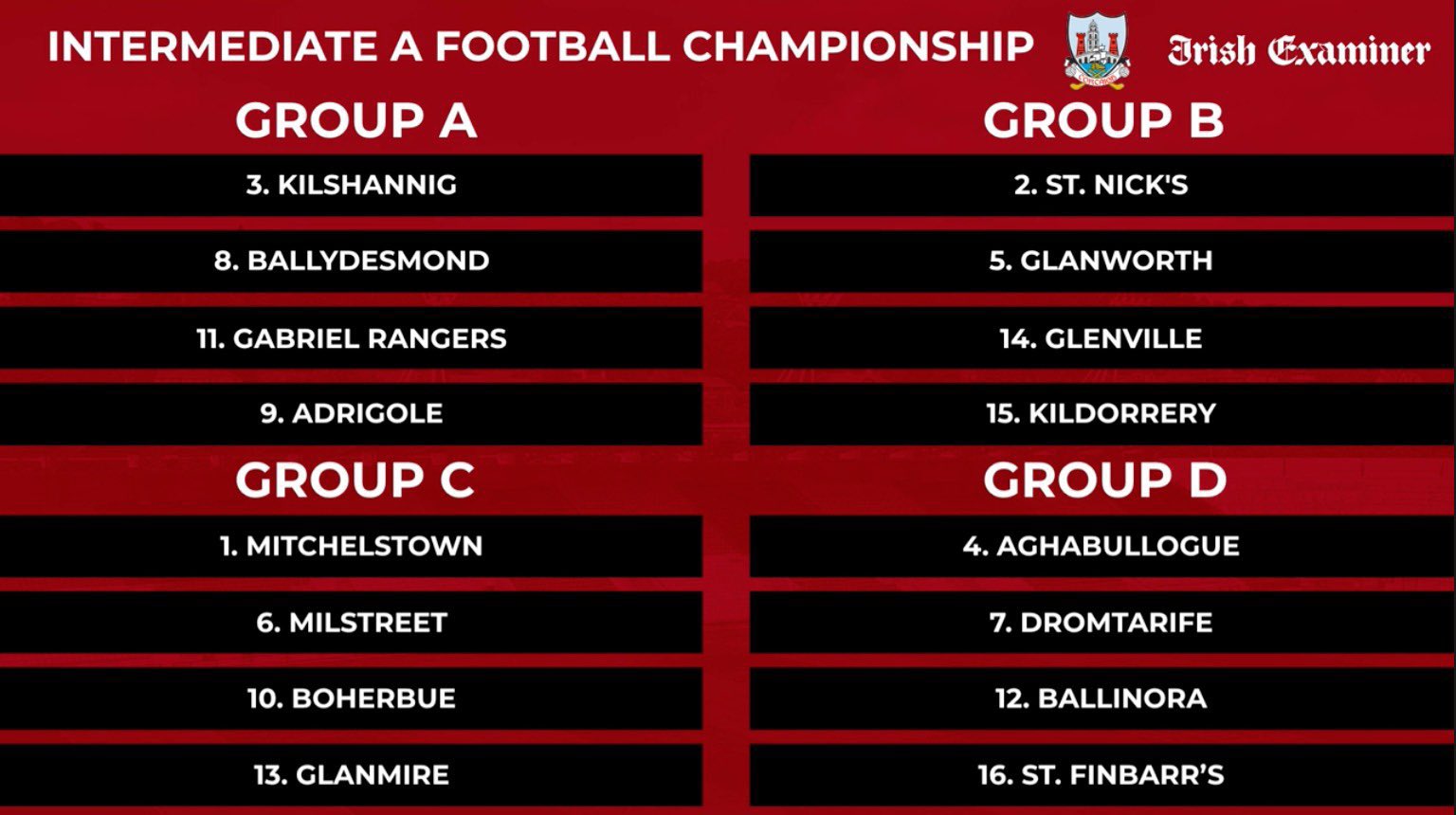 Group C toughest group by a long shot, hard to think that 1 of those 4 will be premier junior next year. Group B seems handy with St Nicks, Glenville and Kildorrery there.
D

Cork93 said:
Group C toughest group by a long shot, hard to think that 1 of those 4 will be premier junior next year. Group B seems handy with St Nicks, Glenville and Kildorrery there.
Click to expand...

St.Nicks have to show something at some stage you’d assume? In free fall with 4 years. What’s there real level?
C

Dunedin said:
St.Nicks have to show something at some stage you’d assume? In free fall with 4 years. What’s there real level?
Click to expand...

Given the group they’ve gotten they might. If you’d had them in with Millstreet, Boherbue and Glanmire they’d be straight down to premier junior.
Tough to call at this stage who the 4 teams to get relegated will be. All to play for.
P

Some huge variations across the groups, having seen most of these at some stage in recent seasons I’m happy enough to throw some predictions out.

Kilshannig strong favourites, could go anyway between the others I feel.

Glanworth the only ones with a mildly decent 21, again could go anyway between the other 3 you’d imagine.

Hard to put Millstreet bottom, could easily go through and would make it out of any other group, Mitchelstown probably have to be favourites given how close they’ve been in recent years, think Boher will do enough to stay enough but fancy Glanmire to scrape through.

Aghabullogue always seem to have enough about them to go on a deep run, think Ballinora have enough to get past Dromtarrife and the Barrs, they’ve beaten them both over the last 2 seasons in the championship and there’s a good crop of young lads coming through, lack the consistency still though so I imagine we’re in for some tight games.

Overall, Mitchelstown and Kilshannig probably the 2 out in front, don’t think Boherbue will be sweeping all in front of them like past Junior A champions. 4 reasonably well matched groups.

Agree Patman! Although I think Ardigole could surprise a few if they could get the young O Sullivan brothers committed and going well.
S

Fairly accurate summation Patman. Also agree with you that Mitchelstown and Kilshannig are out in front at the moment. Group C is a group of death while Group B will leave all of them believing they’ve a chance where otherwise they might have been under pressure.

Early (Very early) prediction to go down to Premier Junior would be - Ballydesmond, Kildorrery, Boherbue and Dromtarriffe. Bally had a good year last year however at some stage they’re going to have to stop relying on the great man and he’s 41/42 now I think. Kildorrery survived by the skin of their teeth last year when only one was going down however, the group they have gives them a chance to survive. Boher are a good side but could not have got a harder group. Wouldn’t fancy them to beat Mitchelstown or Millstreet and think Glanmire will be getting better year on year. Dromtarriffe have lost to two of their three teams last year, and lost well. They’d need a big reversal which is of course possible.
Knowing the nature of this championship, they could all end up qualifying as well. Really hard to predict but happy to have a shot anyway lol. Can’t wait for the games now and to be proved wrong.
F

The good thing about this grade is you couldn’t be certain of any team finishing bottom.
A is surely between Bally and Adrigole
B Anyone bar Glanworth will go down
C Boherbue look the weakest.
D The Barrs second team could be in trouble here the only thing it could be a very tight bottom 3 and the Barr’s could either have a weak team for the 3rd game or a strong team all depends on how their hurlers go

Group B is a joke of a group the county board not seeding team 3rd and 4th seeds individually allowed this to happen,

I don’t think I am wrong in saying the weakest two in the division are in that group and possibly the 3rd weakest in the nicks.
U

I don’t think Nicks will be the pushover some here believe. They weren’t exactly trounced in PIFC. Am I right in saying the bottom team in each group will be in Premier Junior next year?
L

You're right Uisce. There's 4 to go down to Premier Junior with 8 coming up from Junior A.