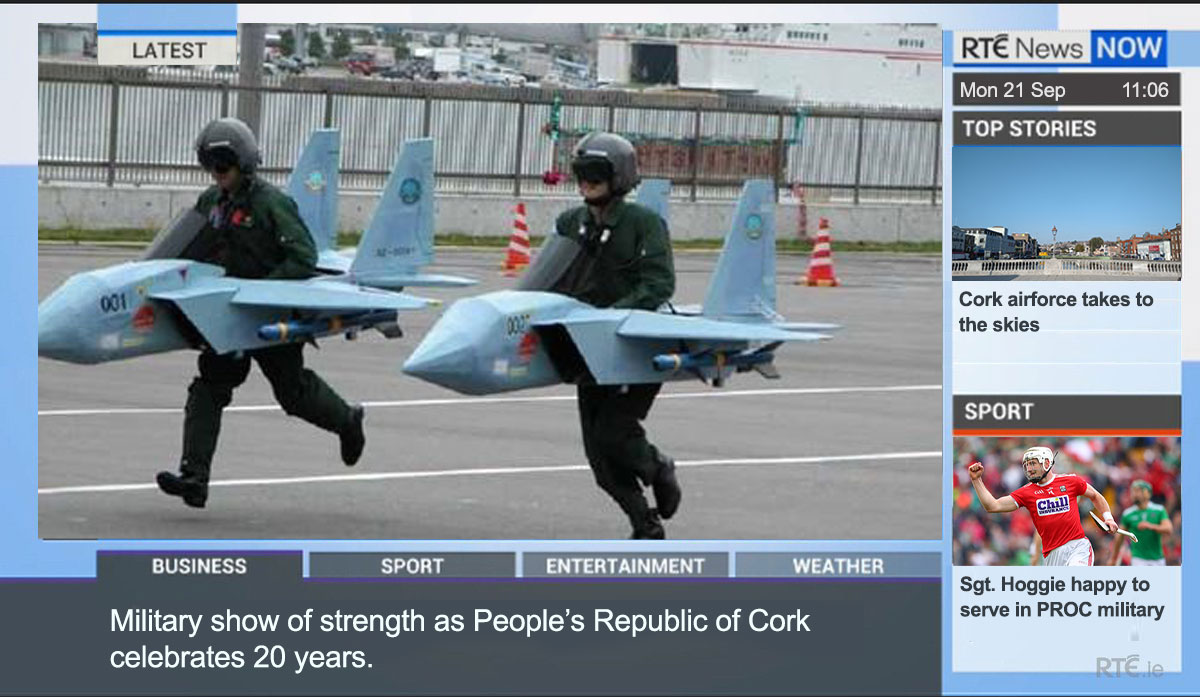 This week, all around the world, celebrations are taking place to mark 20 years of the PROC website.

From Passage West to Pyongyang, from Burnfort to Buenos Aires, whoolies and lock-ins are taking place in free gafs and shebeens everywhere as the globe is overcome with joy.

On Leeside, it’ll be done with the traditional unique humility expected from any Corkonian celebrating a birthday. We wouldn’t like to draw attention to how far ahead of everyone we were with the PROC at the time – to do so would be grotesque and pompous.

We are, of course, humbled by the billions of people around the globe who will take time to reflect on the glorious, daycintness of Cork and its technology geniuses that created such a ground breaking website back in September 2000.

It took nearly four years for America, the world’s so-called technology leader, to respond with anything remotely as unreal as the PROC website – brazenly even using the same programming language, PHP (which stands for ‘pure hard programming’ language), to create a website called Facebook.

Talk about copy cats, like. We should have sued, but there were a lot of hurling victories to attend in 2005. Sure, you can’t do everything. Especially on a brick phone with a hangover in a drab B&B in Thurles on a wet Monday morning.

For its first few weeks in existence, Facebook was only knocking out a few hundred pageviews per day while we were getting thousands at the same time. We still go to sleep with a smug face every night knowing that we were once bigger than Zuckerberg’s behemoth. Even if it was just for a few seconds.

Unfortunately, the website lost the run of itself from then on. “Business people” and investors started to circle and were embraced too readily. Immoral amounts of cash were pumped into aggressive marketing campaigns to grow the user base. Standards slipped. Morals went out the window. Clicks were the new God.


Not at PROC though. We were turning away trillion dollar investment proposals and trying to block desperate hedge fund managers’ phone numbers.

“LADS! We’ll build ye a big mad house with a ball alley and a swimming pool full of tanora down in Barleycove if you give us the PROC,” they said.

“Sorry, bah,” we said, “here’s the number of a feen called Zuckerberg who can help ya. He’s mad for coin and we have a Cork slang dictionary to write”.

Same craic when Twitter came along in 2010. They’d even approach us at matches down the Páirc.

“LADS, us again. Twitter is getting a ton of investment for their website and they have a 140 character limit on their posts. Ye have no limit on posts in yer discussion forum, would ye not swap the PROC for a brand new Páirc Uí Chaoimh and Aisake Ó hAilpín’s Aussie rules contract?”.

Sure, you’d be worn out from them. There’s only so many eight course dinners on super yachts with celebrity entrepreneurs and Russian oligarchs in Monaco you can take too. And these langballs would always produce a brief case of cash after they brought out the Guinness cake shaped like a hurley to “impress” us.

“Final course of the night! You Irish guys love your Guinness, right?”

We’d just get up and walk away in despair. How did these fellas make so much money being as thick as this? Our Cork conscience wouldn’t allow us to take millions from someone this dopey. Imagine what he would have done to the PROC. He could have turned it into Facebook or Twitter and made it all swish, shiny, and popular and technically reliable. Ughhh!

Look at Zuckerberg now. A global pariah responsible for thwarting elections and being hauled in front of  U.S. congressional hearings. Bet he’d give anything now to swap all that hassle for an obscure blog on a local talk page?

Our low-key 20 year celebrations begin here on Leeside this weekend with a military parade and a show-of-force in the city centre involving all brigades of the PROC Army as well as a flyover of the city centre by the PROC air force and some inappropriately loud blowing of horns from our navy fleet down the harbour.

We will also have an announcement about the opening of the first Peoples Republic of Cork embassy in a very controversial location in the Middle East, the last-minute addition of a PROC candidate to the U.S. presidential election that is guaranteed to win it and we will also reveal details of a historic agreement with a major industrial power to produce a commemorative ’20 Years of PROC’ milk carton.

You know yourself. Keeping it nice and low-key.