In place of Lonely Planet's scandalously biased "Top Ten Beaches" (which hilariously featured a beach in Dublin) we bring you the real list of Ireland’s Top TWENTY Beaches which has been painstakingly curated to ensure it is unbiased and fair. You will be delighted, but probably not that surprised to learn that all are in Cork.

Inchydoney
Stunning, wide, sandy beach with crystal clear water that has won more accolades than it drums up waves. Perfect for ball games, swimming and sand castle building on such an industrial scale it would put a Dubai developer to shame. Nearby surf school, nice public toilets and savage grub in the four-star hotel to boot. 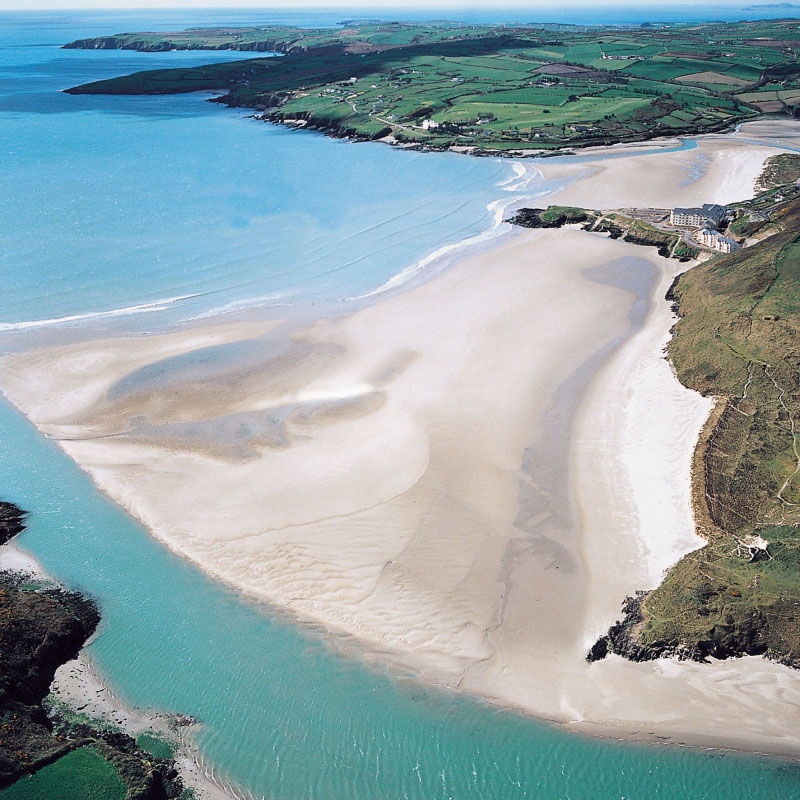 Ballydonegan
Along with the mind-blowing beauty of its location at the tip of the Beara Peninsula, this gently sloping beach has uniquely gorgeous sand that was excavated from nearby Allihies copper mine two centuries ago. You could swish it through your toes all day. Nip up to the village for a toasted special and a creamy pint of stout afterwards with a spectacular view of the Atlantic below.

Harbour View
A real off-the-beaten-track beach with powdery sand, calm blue water and well-sheltered from prevailing winds, this gem of place is great for families – plenty of space for big games of hurling, seaside barbeques and with its long shoreline shallows and gentle waves, it’s ideal for splash-mad smallies.

Garretstown/GarryLucas
The twin sisters of Cork’s endless list of iconic beaches comes in two distinct halves: Garretstown is a surfer’s paradise where the Atlantic rarely fails to conjure up excitement for adrenaline junkies, while bigger, but equally beautiful, Garrylucas the more serene, family-friendly option with an exquisite view of the Old Head of Kinsale.

There are only two words you could use to describe these two beaches: ‘Un’ and ‘real’. A toasted special or some fresh seafood up the road at The Speckled Door will put the icing on a day you’ll never forget. 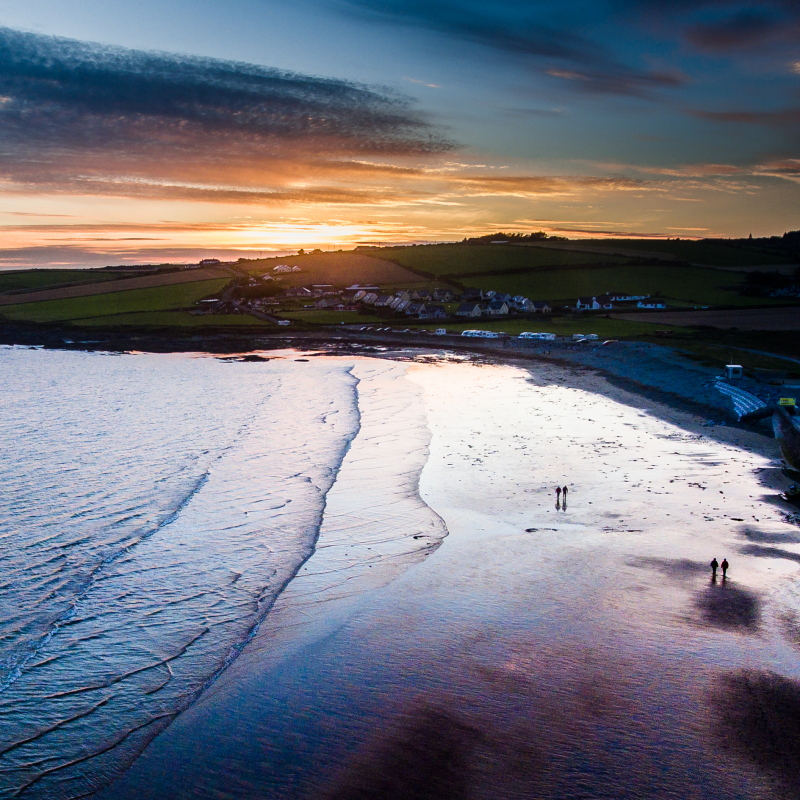 Long Strand
If it’s the roar of the Wild Atlantic you’re after, then look no further than the huge expanse of Long Strand and it’s alluring sandy dunes, long suspected of being the result of a 18th century tsunami caused by an earthquake in Lisbon.

Overlooked by the magnificence of Castle Freke, constructed around 1750, and nearby woods this is a truly unique location. And with the arrival of the amazing Fish Basket café, Long Strand is now arguably, Ireland’s top beach ticking every box and more for discerning beach lovers.

Blind Strand
Probably, our favourite Cork beach, this is Ireland’s best off-the-beaten-track beach. Few Corkonians beyond Courtmacsherry and the Seven Heads, know about this pearl of perfection, which is just a short drive from the village at the end of an east facing cul-de-sac. Along with a picturesque hill and farm to the south it is sheltered from prevailing south-westerly breeze and whims of the Atlantic.

Redbarn
This elegant sandy beach is about 2,500 miles long. At least it seems that way when you turn around and realise that you’ve been so captivated by its sandy charm, blue-flag standards and lured by the view of Ballycotton island dazzling in the distance that you haven’t noticed you’ve been happily walking for hours.

Barleycove
This place is so majestic and picturesque, that first timers may find themselves having some sort of religious or spiritual conversion when the full splendour of Barelycove becomes apparent.

We’ve even heard that since the pandemic normalised working-from-home most smartphones now just automatically google “houses for sale near Barleycove” after you pay Barleycove a visit – big data knows what everyone who visits here is thinking. And they’re not wrong.


The Warren
Popular with locals for good reason, this almost preposterously pristine beach ticks every box on the list even when the sun isn’t shining. Nearby, Rosscarbery has some of Cork’s best eateries where you can compare your lobster sunburn patches while eating the real thing. 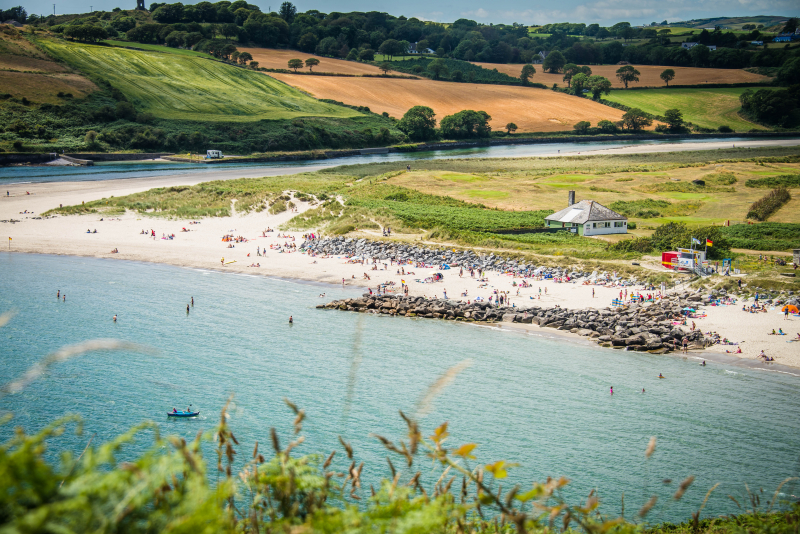 Robert’s Cove
This beach is a small, low-key player among Cork’s celebrity superstar beaches. Quiet and unassuming, it lies at the end of a dreamy harbour overlooked by a big rolling green hill on one side and a tiny village on the other, making its serene waters a swimmers’ paradise.

While the Hollywood-esque status of Cork’s other high-profile beaches can draw huge crowds on sunny days, despite its relative proximity to the city, this gorgeous strand, is somewhat mysteriously, overlooked by many beach bound Corkonians, possibly because it gets covered in seaweed from time to time. These days, the green stuff is no longer seen as waste from the sea, but as a delicacy.

Owenahincha
Less than ten minutes drive from Rosscarbery, this is easily one of Ireland’s top beaches with to-die-for white sand looking directly out into the wild Atlantic. There are nice low grassy dunes for the smallies to explore, lifeguards, a blue flag, a public jacks and a nearby shop that sells ice creams. Just be wide of the tide – you’d be in Manhattan before you’d know it.

The Dock Beach
Well-protected from the south westerlies by small cliffs, this beautiful beach is often an oasis of calm on a day that everyone in nearby Garrestown is chasing bits of their picnic around the beach. Enchanting Jamesfort is a short walk above the beach too if you fancy a bit of 17th century history.

Inch Beach
Tucked away in a corner of east Cork, you might need Mrs. Google to find your way here if you don’t know your Guileens from your Goleens. A simple sandy gem with clear water, great swimming and of course the predictable coffee hipster in a converted horse box. The wonderful walk out to Power Head with an ice cream seals the deal – if you ever get a chance to take a kayak out along the head on a calm day, grab it - even if it results in a criminal conviction for theft.

White Bay
Don’t let the fact that this sandy surprise is actually inside Cork harbour put you off this fantastic slice of beauty that’s just over half an hour from the city. As well as a class view of Roches Point, it’s full of wonder for the little ones with mini-caves, rock pools with crabs and other sea creatures that can be tormented, and the regular sight of giant cargo ships quietly gliding by. The walk back up to the carpark is definitely in the ‘Everest Base Camp’ category, but the lure of an ice-cream in Whitegate will help pump the hamstrings.

Garryvoe
One of things you’ve got to love about this old favourite is that it’s full of the type of Corkonians that are smugly content with the fact that they live just half an hour from where they holiday. No need for torturously boring car journeys, sea sickness on a ferry or the stress of airports. You don’t even have to leave Cork!

And who could blame them? It’s a blue flag beach, the view out to Ballycotton island is magnificent, and the food in the hotel is top class. There’s a playground for smallies and sheltered picnic tables too. There’s even a reasonably credible public jacks that looks as old as Newgrange. Garry-Go!

Red Strand
This gorgeous beach, a short jaunt from Clonakilty, is tucked away into the eastern side of Galley Head which acts like a giant windbreaker on breezy days. Its golden sand is perfect for picnics, but despite the stunning location Red Strand still manages to have an off-the-beaten track feel unlike its celebrity cousin, Inchydoney, 15 minutes up the road where the traffic jams are all a bit Jack Lynch-tunnel on the Friday of a sunny bank holiday. 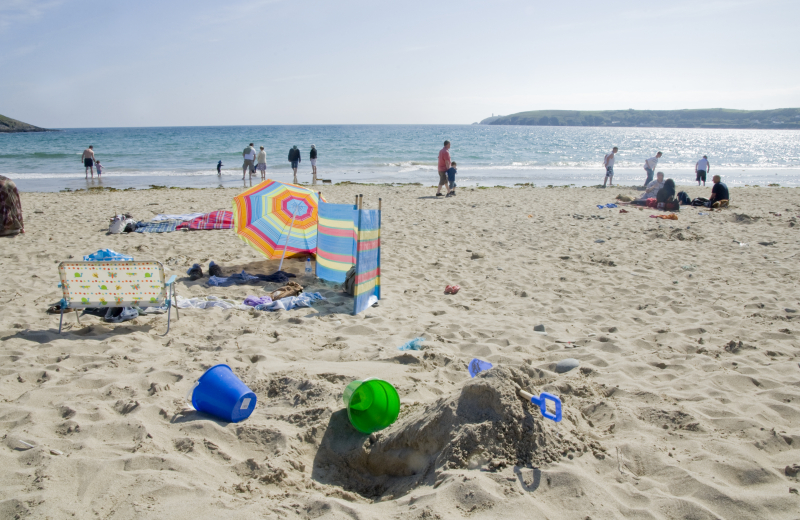 Silver Strand
If you’re really after a hidden paradise that also ticks the Wild Atlantic box, the short ferry ride to Sherkin Island aboard the Yoker Swan is a real treat in itself. The walk across deserted island roads and narrow paths is magical, only topped when Silver Stand suddenly reveals itself in all it’s sandy glory with the splendour of Cape Clear glistening in the distance.

Ballyrisode
West Cork has two enclaves for yachty types: Schull and Glandore. It’s no coincidence that neither have beaches – such public amenities might draw riff-raff who don’t even own an SUV not to mind a 40 footer.

Schull does have a secret beach though, less than 15 minutes drive west of the village on the Goleen Road. Ballyrisode is a little hard to find, but the reward is, an almost sickeningly stunning, beach set in an epic landscape of grey rocks and wild, craggy, green hills. The sand is perfect, the water is crystal clear and the cosy east-facing location makes it an oasis of calm.

Myrtleville
As the one of the closest beaches to Cork city, this place is hugely popular on warm weekends. Despite some bad publicity in recent years, local volunteers religiously keep this beauty spot immaculate. Myrtl’a is a beautiful beach with golden sand that slopes down to the sea bubbling below. If they had this in Dublin, Bono, Enya and other celebs would be living here and writing songs about it. Lucky for us, it isn’t!

Rocky Bay
Farther south along Cork’s coast is another secret nugget of beach gold. Parking is very tight and the addition of a sprawling concrete access ramp a few years back is an eyesore, but everything else about little Rocky Bay is truly amazing.

Go for a dip and look back at the towering cliffs that rise up behind the flat powdery sand and work their way north along the coast. Don’t be surprised if you spontaneously burst into a verse of D’Banks.