<< Use The Bus Pass Instead of the Vaccine Passport...
Ireland's REAL 20 Best Beaches >>

Sorry to come across all Q-anon-y there, feens. But are Lonely Planet trying to deter visitors coming to Ireland or what, like?

Last week, the famous travel publication issued a supposed list of Ireland’sTop Ten beaches. To say the list lacked credibility is somewhat of an understatement – it’s so bad that it could possibly used as a list of the top ten beaches you should avoid. We had to double check it wasn’t published on April 1st.

As if the insult that not one of Cork’s magnificent, pristine, blue flag paradise-on-earth offerings wasn’t enough, they included a beach….in Dublin! 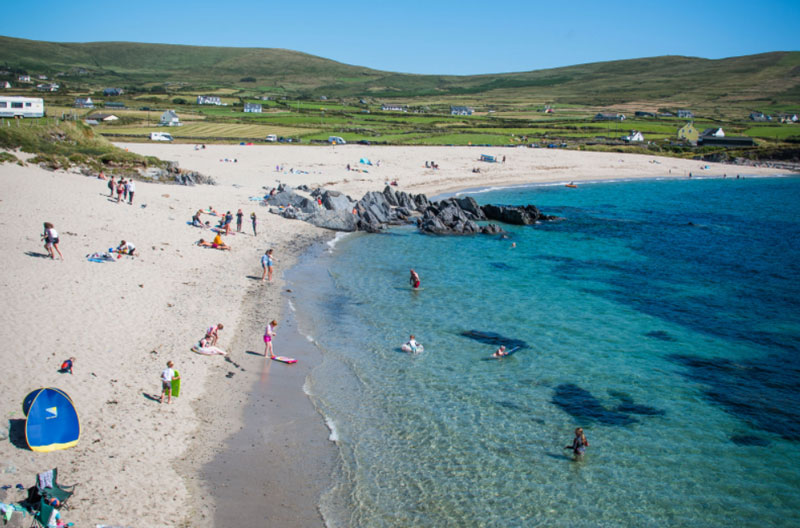 Ballydonegan beach in Allihies. Not as good as a radioactive stoney filth pit in Dublin, apparently.
The brass neck of then. This would be like if you had selected Dustin the Turkey as man-of-the-match when Cork whipped Dublin in the hurling last year.

You have to laugh, though. Lonely Planet, describe the attributes of Killiney “beach” in Dublin as “long” and “stony”. To be fair, there are builders provider yards in Cork that would qualify under that criteria. The very minimum for such an important and influential list should be that a beach is  sandy. Lying out on a stony beach is like trying to sleep on a bed of nails. And what kid will take you seriously if you suggest they make stone castles with their bucket and spade?

Killiney is a seaside ‘stone quarry’ at best so it should be disqualified on that basis alone.

The next thing that’ll supposedly have visitors flocking there is that, wait til ye hear this one…..Bono and Enya live nearby!

Surely, this should be classed as some sort of health warning along with other concerning traits like ‘not that far from Sellafield Nuclear Plant’?

Maybe the suggestion that it’s surrounded by big celebrity gafs, implies there’s slightly less chance of having your wallet soilked here than anywhere else in The Pale and if it is, at least you’ll have plenty stones to fling at the perps?

If you did end up on this particular ‘coastal gravel pit’ and you set yourself up to balm out and close the eyes for a few minutes to daydream about how daycint Cork is, imagine how much it would wreck your buzz if you suddenly heard Bono or Enya warbling in the distance or talking loudly on speaker phone to their Dutch tax advisors?

You’d be forgiven for descending into a rage, picking up one of the many nearby bags of discarded nappies and flinging them at the gaunt looking fella in the tracksuit who was quietly creeping up behind you while you had your eyes closed.

In fairness, if all of the beaches, strands and waterside areas in Ireland were ranked in order, Killiney beach would still trail behind places in Cork like that quare patch of mud in the River Lee that emerges by the Mercy Hospital at low tide and or the dry bit of Raffeen creek in Monkstown that overlooks Pfizer’s steamy viagra factory.

And with so many amazing beaches just a short drive away from Cork harbour, you’d really have to be hard up to want to balm out somewhere like that.

The bar to qualify for this so-called Top 10 looks to be lower than a night out with Dublin’s top underpants-fighter Conor McGregor (and in the latter part of his career he does seem to be spending a lot of time lying on his back so you might see him laid out on the stony canvas in Killiney too).

In all seriousness you’d expect better from Lonely Planet. With any credible, independent, peer-reviewed, hand crafted, organic, gluten-free, proper list of Ireland’s top ten beaches, it’s hard to see how any beaches outside Cork could possibly make the cut.

Our beaches have more blue flags than a Scottish independence march and more all stars awards than a team of Pat Horgan’s, yet somehow the Peoples Republic of Beaches didn’t even register a single entry on the Baloney Planet’s scandalous Top Ten Beaches in Ireland….unless of course, they consider Cork to be an independent state and no longer part of Ireland - which would certainly stop us in our tracks and suddenly proclaim it an excellent publication.

But, there’s no evidence for that now so let’s surf the wave of Rebel rage - are we going to take this grave insult to Cork lying down? To hell we are. Somebody has to stand up and advocate for honest, unbiased journalism. That’s why next week we will bring you “Ireland’s Real Top Ten Beaches”.

As well as a highly impartial guide to the actual best beaches in Ireland, it will also be more reassurance for Corkonians that what ye thought was just a clueless list written by some Dublin langer with an anti-Cork bias, is exactly that. And that all the best beaches are in Cork.


<< Use The Bus Pass Instead of the Vaccine Passport...
Ireland's REAL 20 Best Beaches >>