The Everyman Live at Elizabeth Fort

Rapper and spoken-word artist Raphael Olympio, KeSTine and Outsider YP from Outsider Ent come together for a unique concert. Each act will be stamped by the artist’s own influences and distinctive style as they create a music that pushes genre boundaries.

Olympio is a versatile Cork-based artist who enjoys dabbling into various genres to explore his versatility. Although mainly a rapper, he uses other genres to express himself. His music is driven by stories that reflect the challenges of his life and the community he belongs to.

KeSTine has been fascinated by music from a young age and rap soon became an outlet to vent out his frustrations. Growing up in a religious family aided him in understanding and appreciating Gospel music, taking influence from the genre to further push his rap. As a choir member, KeSTine learned to play the piano, which gave him an ear for melody and an alternative approach towards hip-hop.

KeSTine has always been an OUTSIDER and the stage seems to be the only place where he truly feels accepted.

Outsider YP, previously known as Young Phantom and one part of Cork / Tralee hip­-hop collective ApocalypsE, struck out with his first official solo release in July 2015. This alternative and conceptual artist has continued working and growing ever since, pushing the boundaries of genres with his ever-changing music. Coming from diverse inspiration, his lyrics are a unique blend of reality and fiction delivered in various flows and over unorthodox beats.

The record label Outsiders Ent promotes creativity and artistry amplified through the expression of sonic, stylistic and visual nuances. They are part of an unorthodox movement revolutionising and showcasing the rise of a neo urban culture. 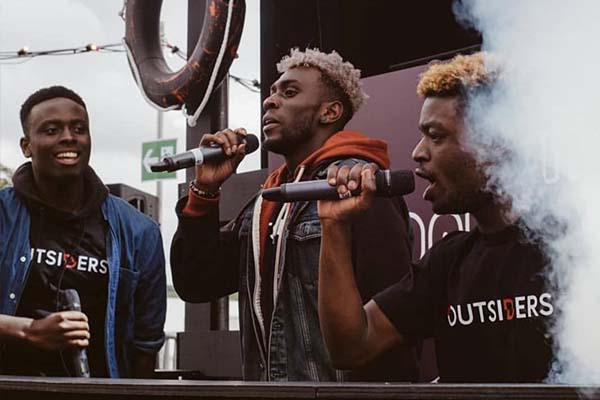