Niwel Tsumbu with Éamonn Cagney play a live show tonight part of the Live performance support scheme. This show has limited seating and free entry. It will also be filmed for release on YouTube and Facebook at a later date.
Part funded by:
The Department Of Tourism, Culture, Arts, Gaeltacht, Sport and Media.

“Niwel Tsumbu and Éamonn Cagney’s duo is one of the most authentic, organic and exciting cross cultural musical encounters to emerge in the Irish music scene.”
– Mel Mercier : Director, Irish world Academy of Music and Dance

Built on 16 years of constant collaboration, Niwel Tsumbu and Éamonn Cagney are known for their incredible musical chemistry and exciting, joyous performances.
Besides their duo music, they have worked in traditional Irish, Jazz, world, contemporary, electronic, opera, soundtracks, dance and countless other musical forms.

The duo has been uplifting audiences for over a decade, and they have made many recordings and videos, with continuos appearances on national and international media.

Expect a highly engaging concert, both intimate and elaborate, a musical river whose sources

range from classical to Central Africa, with pulsating rhythms,and so much more.

“This duo had a cataclysm of moods and moves to share, unveiling a cavernous stash of redemptive music, and promise of much more to come”
Irish Times
“Tsumbu and Cagney’s fiery percussive exchange crowned a memorable performance”
All about Jazz 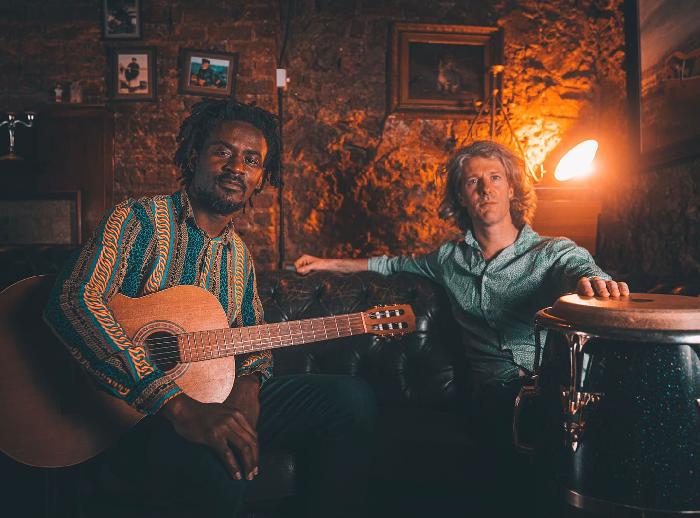