Despite making a later in life arrival on to the comedy scene than most, Paul has made up for his late start in his comedy life
by making a massive impact on the Irish comedy scene.
Paul wasted no time and rapidly racked up winners trophies in some of Ireland's premier new comedy competitions, winning both the Capital Comedy Club Comedy Competition in Dublin and the Golden Toilet Duck award at the Galway Comedy Festival
(He also just won Ireland’s Funniest joke competition 2018)

Paul followed up his truly impressive start by going to support some of the biggest names in Irish comedy including Karl Spain,
PJ Gallaher and Neil Delamare.

He has now been performing regularly at all the Irish comedy clubs and festivals for over 8 years including regular spots at the Vodafone comedy carnival and Electric Picnic.
In 2018, Paul joined forces with ‘Totally Wired’ for a sell

out tour of their show ‘Don’t give up the day job’ and In 2019 Paul took his own show ‘Joke Detector’ to the Edinburgh fringe for a sell out run.
Also in 2019, Paul took up a weekly spot on FM104’s talk show, Room 104, as ‘The Punmaster’ His fast paced, gag filled act has made Paul one of the most in demand acts in Ireland and increasingly in the UK

'The future of Irish comedy is in safe hands' - Comedy Ireland
‘Fantastic set! Crowd were genuinely crying for more!’
- The Stand, Newcastle 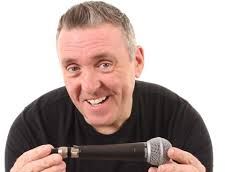