“It's about hopelessness and darkness,” says Aidan Moffat. “But in a fun way.” The Arab Strap frontman is speaking about the band’s 7th studio album and their first since 2005’s The Last Romance.

The pioneering Falkirk duo of Moffat and Malcolm Middleton called it a day in 2006 but got back together 10 years later to perform a series of acclaimed and sold out shows. “We really enjoyed doing those gigs,” recalls Middleton. “So it made sense to try writing together again”.

Prior to splitting up the band released a string of acclaimed releases spanning albums such as Philophobia, The Red Thread and Monday At The Hug and Pint, several EPs and that most difficult of tasks: a genuinely stunning live album via Mad for Sadness.

Arab Strap started out as an intimate project with home-recorded tapes shared between friends, but after the unexpected success of their inimitable debut single ‘The First Big Weekend’ they quickly found themselves, along with pals Mogwai, as some of the most

exciting and cherished music coming out of Scotland. The band’s first gig was recorded live for John Peel, who became an early devotee. The band went from indie record label Chemikal Underground onto the major label Go! Beat and then back again to Chemikal, touring the world and funnelling life’s experiences into a unique concoction of music that explored beauty, sadness, intoxicants, sex, love, and death all rolled into one.

Despite them being a pinnacle group of the era, Moffat makes it clear that the aim is not to “recapture the 90s” but instead to create a distinctly new album, with new tools, sounds and a forward moving sense of exploration. “This album feels like its own new thing to me,” he says. “It's definitely Arab Strap, but an older and wiser one, and quite probably a better one.”

Across the 11 tracks, the band have tapped into their core sonic foundations and what made so many people fall for them but also stretched it out into new terrain. The deft mix of post-rock soundscapes, subtle electronics, clicking drum beats, swelling strings and Moffat’’s incomparable half-sung, half-spoken vocals are all present, but so too is a variety of new additions from blasts of woozy saxophone to disco grooves and a rich immersive production that plunges you deep into the stories. “We've had enough distance from our earlier work to reappraise and dissect the good and bad elements of what we did,” says Middleton. “Not many bands get to do this, so it's great to split up.”

Whilst Moffat jokingly says “we're still doing what we always do: Malcolm gives me some guitar parts then I’ll fuck about with them and put some drum machines and words over the top”.

The band has reconnected with producer Paul Savage, with just the three of them in the studio, as it was the very first time around. “Paul brings comfort and trust,” says Middleton, “And a sense of continuity.” Savage’s light touch approach, combined with the band’s evolved craft, has created a potent production that brings out the best in the duo. “I've never been interested in making slick records,” says Moffat. “But the new stuff sounds much fuller, brighter and better because we actually know what we're doing. I think for a long time we didn't know how to express what we wanted in a studio.”

One of the benefits of the band splitting up, coming back to perform live, and then releasing the album as and when they felt it was ready, is having plenty of time. “The initial idea after our 2016 gigs was just to mess around and see if any songs came,” says Middleton. “So we had three years to hammer things out before even setting foot in a studio.” The result is an album that manages to capture the reconnected essence of the pair playing live again, harnessing that reborn but deep-rooted intuition, along with use of time, space and thought to allow the album to grow into its own natural thing. It’s a record that manages to feel like both evolution and revolution: a continuation of what has come before but also a bold leap into the future.

The album opens with ‘The Turning Of Our Bones’, a comically dark metaphor for the band’s own rebirth that Moffat describes as being about “resurrection and shagging”. Widely covered upon its release with countless radio plays, it’s an immediate addition to some of the band’s greatest work, unfurling via hypnotic beats, infectious grooves and spiralling guitar lines as Moffat skips between narrator and crooner. It sets the tone for an album that often plunges into dark territory, although this doesn’t necessarily manifest via stilted morbidity but simply by being rooted in nocturnal exploration. “The general theme of the album is what people turn to in times of need,” says Moffat. “And how they can hide in the night.”

‘Kebabylon’ merges hissing beats and looping guitar melodies to explore a night-time odyssey that was inspired by Moffat reading a story about overnight road sweepers in London. Elsewhere ‘Fable of the Urban Fox’ shifts from a folk shuffle to a soaring string-laden charge, and powerfully uses the story as an allegory for the racist treatment of migrants, whereas ‘Sleeper’ and ‘Just Enough’ tackle themes of addiction and self-harm.

However, despite the seeming bleakness of some subjects, the album marries the darker underbelly of life, and its lingering sense of hopelessness, with a quiet buoyancy, which coupled with the expansive sense of sonic experimentation results in something as introspective as it is enlivening. As Middleton told the Guardian when they profiled the band upon news of their return, “There's no point getting back together to release mediocrity.” 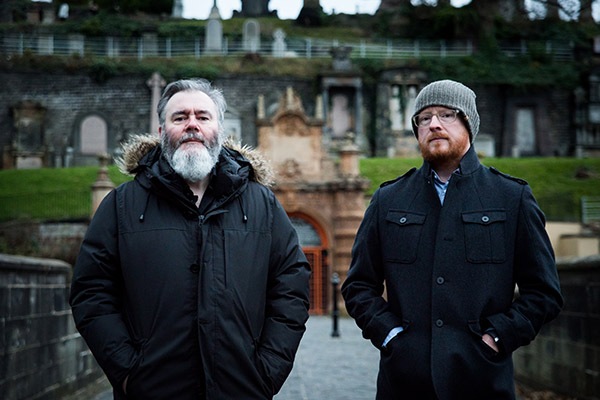