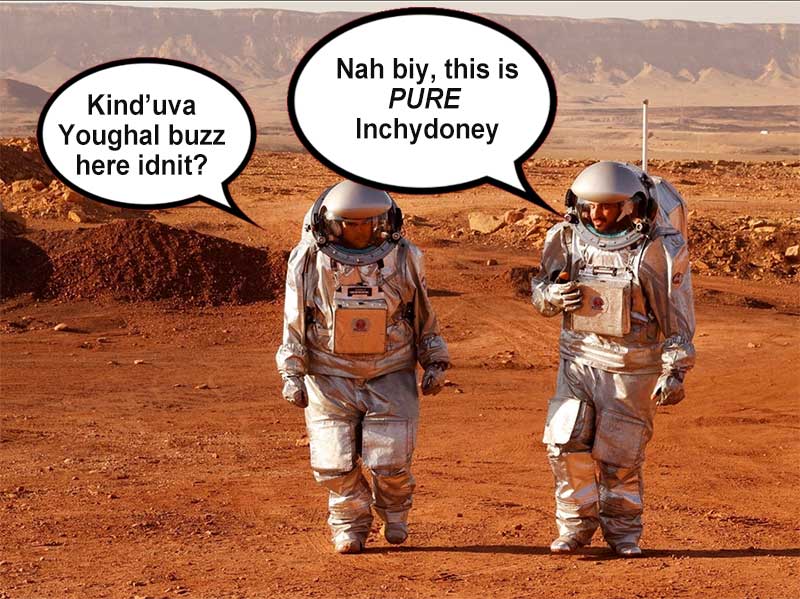 When NASA nerds design a spacecraft they do it on a computer first so they can consider every variable and cover every possibility as to how the machine will react when it is jolted into space. With long missions out to Mars on the horizon, they’re now trying to simulate how well different crew members will get on with each other when turfed out into the great beyond.

They have been analysing all sorts of personality types for the first 18-month Martian mission, assessing their personalities and guessing how well they would react to stress and adversity. It’s a fascinating insight into what makes a good crew member.

Technical competence and conscientiousness are essential, but not as much as you think. Someone who is overly conscientious and headstrong is often seen as a nag by other crew members which can result in conflict. Nobody wants to be locked up with a Davy Fitz type for a year and a half.

A bit of lip or exchanging a few slaps at the fountain on a Saturday night is one thing, but a scrap in a space shuttle has consequences a somewhat bigger than having the simple mortification of the details of your arrest being read out at the court on Anglesea Street on a Tuesday morning.

“Your honour, the defendant was asked to leave the scene, but told Garda Murphy that he would want to cop on to himself. After he was arrested, he claimed he just couldn’t resist the pun.”

A free for all on the way to Mars, might result in a U-turn back to earth and a complete waste of a trillion dollars.

The Americans have carefully studied what makes crews click both in simulated missions and in real life scenarios. Crews stuck together at the South Pole research centre for long periods provide crucial insights.

Interestingly, from a Cork perspective, the quality that emerged from these studies as most essential was a good sense of humour. Researchers studying team dynamics realised that the most important role in a confined team environment was actually ‘the clown’ - the person who can make light of an otherwise serious situation and bring a smile to colleagues’ faces.

How lucky are NASA that they have been able to narrow down their search for humorous humans to the half a million humans of The People’s Republic? Corkonians are the perfect fit.

Now that NASA know where to pick the best astronauts, how do they go about the challenge of picking the right Corkonians for the mission to Mars? It’s a task nearly as daunting as Kieran Kingston trying to decide who will start in the half-forward line against Limerick in the championship.

A good place for the Yanks to start would be the Dunkettle interchange. Mesmerisingly complex it imposes stresses on the human mind that make space training programmes look like a puck around below in Inchydoney.

Anyone who can handle a long, high stress task like that every day would have no bother sitting in a metal can for six months as they journey to Mars – which apparently doesn’t even have any four lane roundabouts where you run the constant risk of being mashed between two massive articulated trucks. Sounds like a doddle in comparison.

One of the major challenges for astronauts in a spacecraft is the dreaded ‘re-entry’ process. As they hurtle back towards planet earth communications with ground control are lost for several nerve-wracking minutes and the vehicle’s surface temperature soars high enough to cook a pound of gourmet sausages from the English Market in the blink of an eye.

Dunkettle drivers would be grand with this though - they regularly experience losing touch with the outside world as they enter the Jack Lynch Tunnel’s dark zone and mobile phone coverage completely disappears. If you get stuck in a jam at the bottom of the tunnel deep underneath the River Lee, you even run the risk of the podcast you’re listening to conking out when the 4G drops. Terrifying.

As they work on their computer models to choose the perfect Cork crew for the mission to Mars, scientists will have one additional problem to factor in: Corkonians getting home sick.

However, the People’s Republic of Cork Department of Spacers has provided an alternative to skirt around the problem.

Rebels’ homesickness could be eliminated if NASA agreed to deem Mars to be part of Cork. The planet already as a distinctive red buzz about it and if astronauts were allowed to name parts of it after areas in Cork that would put an extra pep in their step.

The county recently ceded land to the city in the infamous 2019 boundary change so this is the ideal opportunity for Cork County Council to gain new territory (and remember, Martians, contact Irish Water not County Hall if you have water issues!).

The craic and thrill of deciding which valleys on Mars should be called Glanmirus Maximus or Gouganbarrus Minimus would keep crew morale high and the thought of planting a Cork flag on the Martian south pole would keep any Cork crew up the walls with excitement for the entire six month journey.