<< De Jazz That Never Was
Cork Knock Kerry Out Cold >> 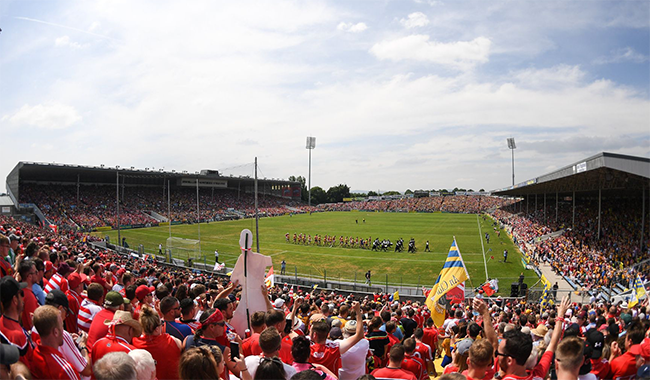 Excitement is building across the county ahead of next Saturday’s hurling showdown with Waterford. It feels like continents have drifted the length of a hurling pitch since that time in July last year when Hoggie took on Kilkenny, pretty much on his own.

Sadly, Cork fans won’t have the option of travelling to see the Rebels in action this time. No trip to Thurles this year is one of a long list of things we’ll miss out on in 2020 – this championship will only be seen on telly.

If you want to replicate the big trip to Tipp at home, there are a few things you can do to create a virtual day out in Thurles.

Destination Semple
The first is the long drive. Get into your car around 10am this Saturday morning and stay there until lunchtime. Then open up your boot and have the ‘hang sangidges’ and a flask of tea in your driveway in the rain (who cares if the neighbourhood curtain twitchers think Herself is after kicking you out, the championship comes first).

Then go for a pointless two mile walk around your neighbourhood and arrive back at your house five minutes late for the match frustrated with the lethargy of the auld fellas manning the turnstiles.

You’ve arrived at “the stadium” and the match is underway. The last thing you need if Cork concede a goal is Marty Morrisey or Michael Duignan’s mouth telling you what a superb strike it was and that the Rebel defence is at sixes and sevens. So, stick your telly in the sitting room window and stand outside in your front garden in the cold so you can’t hear the wafflers.

This will give you the full authentic Semple experience where you’re not quite sure who’s wearing the number 18 Cork shirt because you were late and didn’t get a programme. You’re also oblivious to why the ref gave the free out when Hoggie struck goal or any other useful information that a commentator would relay on TV. Ignorance is bliss.

For Cork fans who prefer a stadium seat to the terrace, we’d also suggest placing a vertical 2x1 baton in front of a portion of the television to replicate the awkwardness of a poorly selected position in the stand so that your view is partially obscured (usually by an iron girder holding up the roof or a row of gangly giant teenagers from Ballymacoda).

Hurler on the Ditch
For a real Town End Terrace buzz you need a stream of constant negativity from a few cranky old Cork fellas (and imagine how irritable they’d be this year after all the cocooning, they’d be pure livid!).

You know the type: they don’t “accept” either of Donal O’Grady’s All-Ireland winning teams of 2004 and 2005 because they didn’t play enough ground hurling and that compulsory helmets have turned modern GAA players into pre-madonnas.

So, get a family member to read, or preferably roar, out all the negative comments they can find on social media as the match progresses:

“C-L-U-E-L-E-S-S!”
“That young fella isn’t even related to a hurler!”
“Our backs are being cleaned out like an infected testing centre!”

And that’s just the first ten seconds after the throw-in.

Chipperary
It’s not Thurles if you’re not force feeding yourself chips in the Square after the game has finished. “Traditional” Tipperary take away food is one of the most difficult things to recreate for your virtual Munster championship simulation. Cork chips just aren’t the same because they are actually tasty and made from real fresh potatoes.

For the genuine Chipperary experience you need to order chips from any Cork chipper tonight, roll over them with your car a few times and leave them in your drive way for crows and rats to gnaw at.

Then on Saturday, sweep up what’s left and reheat them in an old kettle filled with engine oil. Add enough salt and vinegar to double their weight so that when one of these objects finally slithers into your oesophagus, you’ll definitely feel like you’re standing in the square in Thurles.

Take Your Pint
Now that you’ve got your soakage on board it’s time to get tanked up. Take a delicious, well balanced Cork craft cider, use an old bicycle pump to fill it with air bubbles, add half a bag of sugar and half a dozen eggs.

Now stir it all together in your toilet cistern and collect the flushed residue in a chipped pint glass that has spent at least half of its life in a Garda evidence bag. Now you’ve almost got an authentic Thurles Square pint ready to go – just be sure to throw 6 euro in the bin to seal the deal.

Back to Cork
Now sit into the back seat of your car in the driveway for two and a half hours and slur your way through a vague recollection of the match before nodding off. When you wake up shivering at 3am let yourself into the house and go digging in that kettle for left over chips, then collapse into bed waking up your better half.

“How was the match?”
“Good craic but that Thurles place is a fierce kip. Brilliant to be back in Cork though!”.

<< De Jazz That Never Was
Cork Knock Kerry Out Cold >>