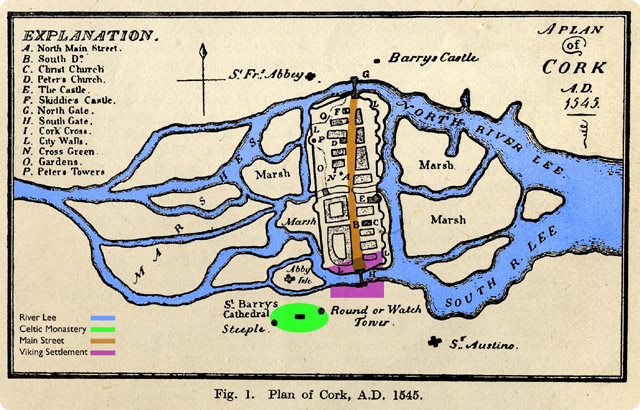 In light of the success of the city’s much-lauded pedestrianisation and the now muted opposition to it, we take a look back at our 18th century archives and this old PROC column from 1732 that discusses the local issue of the day: filling in the city’s channels…..

C’mere, you’d have to wonder what Corke Corporation are thinking by proposing to fill in all the river canals and channels around the city. Sailors say they’re trying to turn Corke into one of these faraway places like Falmouth and Bristol where goods are transported around on horse and cart instead of the proper way - by boat. Others say they are being forced to do it by Parliament.

Our beloved city is made up of many small islands and it looks like they are trying to merge it into one big giant one. According to some Aldermen, the plan is for Corke to become one big island and the river will have just two channels – north and south. Just two channels?!! Ugh!

How are ships’ masters and their hard-working crews going to get their cargos from Merchant’s Quay, up the street to Thomas Brown’s at Winthrop Street? After days at sea are they then suppose to lug them on their backs to the shopes for where they are destined like a bunch of gomey langereths?

Imagine travelling all the way from Falmouth under sail with one thousand sacks of flour and maize on board, then traversing the treacherous harbour and River Lee, avoiding pirates and then arriving at Merchant’s Quay only to be told that you’re going to have to tie up and carry all the flour right to the door of Mr. Roches’ stores? What of the days when you could sail right to his stores, tie up outside and toss your cargo to his boy-slaves?! Are they lost forever?

The Corpo say the plan is that horse and carts will be used to draw cargo from ships to stores and the filling in of the channels will improve the stench of death in the city.

This will impose impossible costs on businesses that are already stretched – the price of employing an 7 year-old boy has already increased two-fold at a time when most of them refuse to work more than 70 hours per week.

The Corke Association of Business Men is holding a meeting (free cup of stout) next Tuesday morning after the weekly public hangings to discuss. They expect a rowdy crowd and have asked members to bring their own pitch forks.

More opposition comes from the marsh to the west of North Maine Street.  Landlord and member of parliament George Cromwell-Grattan says the 230 Irish speaking tenants in one of his buildings he will “have no where but the street” to throw their night pots each morning if the channels are filled in.

Incredibly, some dim-witted citizens have expressed their support for the Corporation’s proposal. For example, Castle Street resident Mrs. A. Woke says that she finds the sight of dead bodies and human waste left in the channels to rot “distasteful” and that “such ignorance” would not be tolerated in her home city of Poole.

(It should be noted that this lady once suggested the city buy a plot of land and place dead bodies in holes there! Imagine trying to convince already hard-pressed citizens of the need to purchase a hole in the ground where they can be thrown upon their death? Is the lady even aware that the price of candles have doubled in the last year?

Other queer proposals the delusional Mrs. Woke has in mind include the compulsory schooling of children until they are 13 years old. Heavens above, these flakes of snow! How are you supposed to support your wife and children if you are obliged to be in a school until you are almost middle aged?!
Maybe if the taverns of South Maine Street employed teachers she would achieve her silly goal for it’s there you will find most of our hard working 13 year olds.)

Opportunistic populists have looked to take advantage of local anger by pointing the finger at the recently arrived Huguenots refugees – and while it is our duty as subjects of the Queen of England to blame the French for everything – it is not fair. Their excrements may be adding to the stench in the city’s channels, but everyone knows that the French are full of sh*t they should be ignored lest they begin encouraged to recite their poetry or philosophies aloud.

No, no. This silly trend of filling in channels and canals comes from one place and one place only: The Pale. It is from this hell of hells, this den of iniquity, this field of poison called ‘Double-In’ that the minds at Corke Corporation have been corrupted far beyond sanity. A number of the Corporation’s Aldermen spent some time there recently and have returned to Corke with silly notions (most likely after being corrupted by the potions of back-street alchemists).

The sooner these men with their fantasies are brought back down to earth the better. They’d be much better off ‘channelling’ their energy into something more worthwhile like finally getting around to building the ‘centre of events’ near the South Gate Bridge that they promised long ago.

Check out this link for some interesting info on Cork's channels and canals
https://corkorigins.ie/corks-landscape-archaeology/medieval-canals/

Disturbances and clashes between Palestinians and Israelis
12 hrs - 7,394 views