Matlock said:
Photo of Aisling Murphy's class at the funeral mass carrying photos of her is absolutely heartbreaking.
Click to expand...

Two of the lads are in for it when get home... 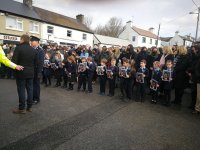 Matlock said:
Photo of Aisling Murphy's class at the funeral mass carrying photos of her is absolutely heartbreaking.
Click to expand...

Hopefully this wont define these kids in years to come, Some kids will find ways of coping , others will struggle,
J

BettyDoesMallow said:
Two of the lads are in for it when get home...
View attachment 9953
Click to expand...

I know you are joking, but god love them, They probably have no idea what is going on,
B

Why should we have to change the message because some men have decided to misread it?
Click to expand...

But if the people who are integral to being part of the solution of making women feel safer are misinterpreting the message and why they need to assist ultimately the message is useless….

BettyDoesMallow said:
Two of the lads are in for it when get home...
View attachment 9953
Click to expand...

'On three, Donal. You tap his ass and I'll grab his balls'
M

jimmym said:
Did i imagine all the crap on media and twitter the last few days where we are told men need to take ownership
of this problem, men need educating,? Why dont they concentrate their anger solely at the perpetrator?
Click to expand...

If you think that the message has been that you need to take ownership for her murder then you did imagine it.
B

Always galls me to see the likes of Michael D and Micheál Martin at the front of the church in these type of occasions. The front rows should be for people close to the deceased.
H

Just reading the latest piece in the IT, the Gardaí have confirmed they will be arresting the suspect as opposed to simply questioning. They are waiting for him to be fit enough so that the answers given are not deemed compromised later in proceedings.

This can only mean that the DNA is a match and they have their man. They seem to have a lot of the detail of before and after the attack now also that they were trying to put together.

I admire Matlock's perseverance and those in the legal profession tend to be very pedantic and literal when answering questions so technically Matlock is right, the message is not that we as men need to take ownership for Aisling's murder itself.

However the broader point is being made. It is ALL MEN. Not that all men demean, belittle, emotionally abuse, physically abuse, stalk etc. But that the tiny minority that do is the responsibility of ALL MEN.

There have been numerous op-ed pieces from the usual suspects since the murder making this point.

This plays into the narrative that all men are potential rapists or bastards or a threat - when the actuality of it is that the overwhelming majority are not. And that's before we talk about the fact that women are not universal paragons of virtue either but let's leave that aside before we fall foul of the whatabouttery elves.

Education should teach all kids, boys and girls, to respect each other, behave with respect towards each other, not bully or victimise or threaten or attack. As kids grow older that should extend to secondary school and to the sort of consent classes that you see at 3rd level etc. After that, if a man attacks or kills a woman or indeed if a woman attacks or kills a man - they are the problem and they need to be punished to the full extent of the law - with the judicial system fully equipped to bring more charges, more cases, more convictions and more deterrent type mandatory sentencing as required.
H

BettyDoesMallow said:
Always galls me to see the likes of Michael D and Micheál Martin at the front of the church in these type of occasions. The front rows should be for people close to the deceased.
Click to expand...

thats politics, especially in Ireland Betty. No politician every does anything solely for the cause, its all about public perception

If it were my sister I would want none of them, or the cameras present.

The Best Of Cork No 8