If we keeps scoring at this rate and plays every available league minute he'll get 51 goals. What a beast

He's currently evens with Skybet to score 40+. Almost hard to see that not landing if he stays clear of injury.

Took that. the only danger to it is an injury as you said.

Seriously, if West Ham sack Moyes they deserve to go down.

Idiotic imho. Fairly sure I saw Klopp at a much bigger price a few days ago.

Form is temporary, class is permanent.

Son is a great price with betfred @ 3.75 anytime imho. ( I don't have a betfred account the glazer sponsoring traitor, but got 3.6 on the exchange)
P

So many of this guy's mini blogs on betting are bang on the money, including this one.

This tweet really comes about as a response to some of the replies on the thread about stale prices (Tweet 147). It is really about this notion that the more markets and selections offered by a boo…

Philby said:
So many of this guy's mini blogs on betting are bang on the money, including this one.

This tweet really comes about as a response to some of the replies on the thread about stale prices (Tweet 147). It is really about this notion that the more markets and selections offered by a boo…

Obviously tweets about affordability checks are all the rage atm so lets add another one. Lets jump on the bandwagon that that the Racing Post and other media figures are beginning to roll out. The sheer panic in their eyes as it suddenly dawns on them….

As it currently stands all I see is one sided vitriol being spouted out. Affordability checks are an infringement on our liberties and choices. All it will do is force people to bet on the black market. The betting industry employs so many people (100k+). It generates so much revenue for the Exchequer (£3bn+). Blah blah fuc***g blah. Why and how are we in a situation where a White Paper will be published that could potentially affect everyone who currently enjoys a bet.

Let's clear up a few things. As I write this there is no legal obligation for a bookmaker to request anything from every customer relating to affordability. A bookmaker is expected to comply with AML and other KYC checks. There is a suggestion from the Gambling Commission that operators use more than just rudimentary deposit or loss thresholds which had been set too high previously (shock). To take into account what an average salary would be. To essentially behave more responsibly.

What has happened is that certain bookmakers have tried to get ahead of the potential looming issue and come up with some criteria of their own that have impinged upon certain customers. To try and make them seem responsible (comical I know). Let's be really clear about why this has been done. The whole industry has for years survived and grown fat on losers. The bigger the better. If they have had addiction issues. Who cares. Ching ching. The penny has dropped that this isnt sustainable or acceptable any more.

Huge fines have been handed out by the Gambling Commission relating to incredibly poor practices undertaken by the bookmakers over the years. These are described as social responsibility failings. Essentially the bookmakers have behaved with reckless abandon. The days of punters dropping £500k over a short timeframe into an account without any checks (apart from a VIP offering) are long gone. This type of behaviour is no longer deemed acceptable and rightly so. There are so many horror stories out there.

Never forget that bookmakers have always had all the data and information you could ever ask for to identify problem gamblers at their fingertips. They chose to use it to pursue as much profit as they could, at all costs instead. You reap what you sow. So some bookmakers have taken it upon themselves to introduce very penal deposit limits or ask for ridiculous amounts of id/proof of incomes/source of funds. They have decided upon the what. The lack of clarity from the Gambling Commission is ludicrous. Common sense out of the window. If someone has won £1m in the last year then depositing £10k will probably be ok. If someone only deposits £10 a time and suddenly deposits £1k and plays on the casino at £50 a spin. Maybe not ok.

So much angst is directed at the Government and organisations such as the Gambling Commission. Fairly. It should also be directed elsewhere though. First and foremost direct it at the bookies. If you are suffering affordability checks that is on the bookmaker and the way they have behaved. Blame the media. Special mention to the Racing Post at this point. Turning a blind eye to the way bookmakers have been behaving over the years has got us into this mess. Regulators are not helping but far from the sole perpetrators.

All these high profile media personalities who have turned a blind eye to what has been going on. Just taking the money the bookies have offered. You have all played a role in where we find ourselves. Where did you think the funding was coming from? Even now all the media is as usual on the side of the poor old bookmaker. It's having an impact on their profits and it might jeopardise how things look in the future.

The simple truth is that the bookmakers cannot be trusted to do the right thing. They have failed time and time again on so many levels to do the 'right' thing. We still see it today with ludicrous data infringements and unnecessary KYC checks. It has become the norm for them though. They have grown so entitled to shocking behaviour.

We have found ourselves in a situation where betting in this country has become 'a tax on the stupid'. You are not allowed to win. You can only play if you are losing money and hopefully lots of it. Literally just donating money to bookmakers and the industry.
One of the problems is that so many different issues get thrown into the mix and it confuses the situation. The vested interests as you would expect in a situation like this are wild. The talk about the black market is just nuts.

Horse Racing is suddenly getting its knickers in a twist. A sport that has grown accustomed to being paid for by losing punters. Rather than look at the product it offers, which is a complete shambles, it is much easier to blame the affordability checks. Everyone else to blame. Horse Racing has needed a huge shake up and radical changes for many years and is unwilling to do so. Too many have grown fat on losing punters. Too many waring egos and vested interests. It will continue its slow walk to irrelevance.

I have said many times that blanket affordability checks are a complete nonsense. I don’t know what the exact solution should be. In the end though it is your average punter who is caught up in the cross fire who will suffer and unfairly so. The starting point would be to differentiate between games of skill and chance. Sports betting compared to casinos. Even in that regard the betting companies having muddied the waters in their pursuit of profit. Casino type offering for sports.

The betting industry for the consumer is so broken it is untrue. Clearly having an industry where customers could win sometimes, lose often (but not everything) was too much to ask for. For some morals and judgement to be used as to what the right thing to do was. To behave in a fair and honourable manner. It was all too much for the bookmaker. They wanted even more. Unfortunately, I don’t trust the Gambling Commission and others to make the right decisions to address the issues.
P 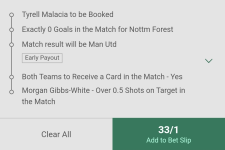 Ladbrokes offering Cas at 4/1, the robbing bastards. Somebody must be taking those prices, God luv 'em

Bookies must be desperate for business. How about not gubbing anyone who wins 3 bets in a row you bunch of clowns?

Trying my hand at a bit of trading for the City Arsenal game. City Price looked a little bit big to me at 1.79, especially if rumours of Arteta resting some is true.

I'm hoping that no team news will make City lengthen that much, but hoping Arsenal rest a few and the price contracts to 1.7/1.65 if it does.