SoundMan said:
Big yellow crane on the right should've been a hint as to the loyalties in that general neck of the woods FU. Were you up at the Titanic Quarter or just coming off the ferry? Hollywood Roadish?
Click to expand... 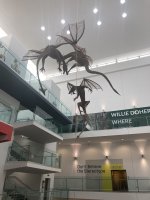 Brandon Lewis draws up proposals for new historical record of conflict, spanning from Sixties through to signing of Good Friday Agreement


An official history of The Troubles will be commissioned under government plans, amid fears the narrative of the conflict is being distorted by republicans.

The Telegraph has learnt that Brandon Lewis, the Northern Ireland Secretary, has drawn up proposals that would establish a new historical record spanning from the Sixties through to the signing of the Good Friday Agreement.

According to multiple sources, the plans, which are being discussed with Downing Street, would help to guard against what some ministers believe to be creeping revisionism around the role of the IRA and the atrocities it committed.

It would also focus on the role of the British Government and Armed Forces in the 30-year sectarian conflict, including the Bloody Sunday massacre of 1972, when 13 civilians were shot dead by troops. If signed off, the official history project would sit alongside a package of measures announced earlier this year to move away from prosecuting crimes committed before the signing of the Good Friday Agreement in 1998 and towards information recovery and reconciliation for the victims.

Approached for comment on Saturday night, Whiteheall sources insisted the official history would be independent of ministers and would involve historians being appointed to produce a balanced historical record. It is expected to take several years to compile, with sources likening it to the official publications produced after the First World War.

The move is likely to be welcomed by unionist parties, who believe that republican figures have sought to diminish the role of the IRA and recast their own role in the conflict. However, it is expected to provoke a backlash from Sinn Fein, the nationalist party, which was historically associated with the IRA during the Troubles.

It also risks further souring relations with Dublin, which has already claimed that the Troubles “amnesty” risks undermining the peace accords and could face a legal challenge being brought in the European Court of Human Rights in Strasbourg.

It is understood that Mr Lewis intends to begin legislating on the statute of limitations before the new year, despite opposition from all five of Northern Ireland’s main parties and the Irish Government.


The effective amnesty will apply to British veterans, former members of the security services and Royal Ulster Constabulary, as well as the IRA and loyalist paramilitaries.

Mr Johnson and Mr Lewis believe it is the only legal way to prevent elderly veterans from being repeatedly investigated and dragged into court.

They also believe the cycle of investigations and legal cases is failing to provide closure and justice for victims' families, who would be better served by a process centred on information recovery. Under the plans devised by the Northern Ireland Office, a group of historians would be appointed by the Government on privy council terms to undertake the project.

The Telegraph understands that ministers are also considering asking the Northern Ireland centenary historical advisory panel, chaired by the historian Lord Bew, to lend their expertise. Work on official histories began in 1908 with an initial focus on naval and military history.

Published in volumes between 1923 and 1949, the History of the Great War was produced by the historical section of the governmental body the Committee of Imperial Defence. It spanned military, naval and air operations, as well as the medical history of the war. However, in 1966, Harold Wilson, the prime minister, announced that the range of official history was to be extended to include selected periods or episodes of peacetime history."
Last edited: Nov 14, 2021
M

That is great because as can be blatantly seen from Soundies posts on this very thread, SF/ IRA are indeed trying to rewrite history.

This bull shit about it being the same IRA all the way back to the 1920's is a shining example.

SF surging ahead in the polls as FF/FG scratch their heads in wonderment as to why a generation with no future would do such a drastic thing.

Could it be the government policy of "won't somebody please think of the poor landlords" has them too out of touch?

No, it's the voters who are wrong*.

Handy Run said:
SF surging ahead in the polls as FF/FG scratch their heads in wonderment as to why a generation with no future would do such a drastic thing.

Could it be the government policy of "won't somebody please think of the poor landlords" has them too out of touch?

No, it's the voters who are wrong*.

Hank Scorpio said:
Yeah and Sean Russell who died on a Nazi submarine, wasn't a Nazi.

You walked out on your country.
Click to expand...

And I'd do it again

Handy Run said:
And I'd do it again
Click to expand...

Shove your currywurst up your b* llocks

Hank Scorpio said:
Shove your currywurst up your b* llocks
Click to expand...

Currywurst is the berries bah. Ze Germans may not be able to cook for shit, but they somehow make the best drunk food.

Sinn Féin Leader Mary Lou McDonald has said the Government's position on not re-examining cuts to the Pandemic Unemployment Payment is "not a runner".

Speaking during Leaders’ Questions in the Dáil Ms McDonald suggested it was "deeply insulting" for people who lost their jobs to be told to find another job.
Click to expand...

Shocking alright. Imagine expecting someone to try and get a job instead of claiming social welfare

MerchantOfEnnis said:
Shocking alright. Imagine expecting someone to try and get a job instead of claiming social welfare
Click to expand...