SF say they will amend their returns for 2016 following the discovery of this over sight,

jimmym said:
SF say they will amend their returns for 2016 following the discovery of this over sight,

Pat Kenny ripped mairead farrell to shreds earlier, He said if SF say they got no invoice from RAI then it should be viewed as a gift
that wasnt declared, She was completely lost ,
M

jimmym said:
Pat Kenny ripped mairead farrell to shreds earlier, He said if SF say they got no invoice from RAI then it should be viewed as a gift
that wasnt declared, She was completely lost ,
Click to expand...

No better man for this scum.
S

Meridian said:
No better man for this scum.
Click to expand...

You're being a bit harsh on yourself there Otto....though maybe not

jimmym said:
According to Fionnan sheehan, sf havent paid the Royal academy of ireland for hiring a room to launch
their election campaign in 2016,
Click to expand...

I wouldn't blame them.
M

Former Sinn Féin councillor Jonathan Dowdall did make a donation to party leader Mary Lou McDonald directly and not to her constituency office as she has claimed, a party colleague has said.
Appearing on RTÉ’s Prime Time to discuss the controversy over Public Expenditure Minister Paschal Donohue’s election expenses, Sinn Féin TD for Dublin Fingal Louise O’Reilly said: “The donation was a political donation, it was made to Mary Lou and it was recorded as such. I’m saying now it was recorded with Sipo (Standards in Public Office Commission).”
Dowdall was jailed for four years last month for his part in the 2016 Regency Hotel attack.
In 2018, he and his father were jailed for waterboarding a man they suspected of trying to defraud them at Dowdall’s family home in January 2015. He was a Sinn Féin councillor at the time after being elected to Dublin City Council in 2014.
Ms O’Reilly’s remark about the €1,000 donation to Ms McDonald directly contradicts claims the Sinn Féin leader made in an interview on Newstalk Radio in November that Dowdall made the donation to her Dublin Central constituency office and not to herself.
Enterprise Minister Simon Coveney, who also appeared on Prime Time to defend his Fine Gael colleague, said: “Last week Louise said this was a donation made to Sinn Féin, on (RTÉ Radio’s) Morning Ireland. And now she has a different story.”
Asked by host Sarah McInerney “why has the story changed?” Ms O’Reilly replied: “Okay, so it was a political donation to Mary Lou and that is how it’s recorded on Sipo.”
She did not say why the narrative over the donation to Ms McDonald in 2011 has now changed


Mary Lou knew well who Jonathan Dowdall was, his position in the I.R.A. and criminal role.

S.F. fully vet all candidates and have done so for decades and why they have to lie about their close association to serious criminals is blatantly obvious.
Click to expand...

Vet their candidates, what is the barometer I have to wonder ? When it comes to SF/IRA, this is usually what they do with buses ; 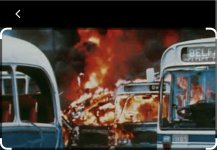 SoundMan said:
You're being a bit harsh on yourself there Otto....though maybe not

Don't please address the point, have a go at the poster instead

SoundMan said:
"I'd be up for that"

"Been there, done that. But if the money is right and you shave properly you might have a chance"

"I've money, and shaved, but she laughed at me when I hinted it"

"Do I really have to shave as well"

There you go Drucker - I've saved you a post

Well done. Thanks for the effort.