Who's winning the war now?

The media is saying Ukraine
C

longbigandjuicy said:
The media is saying Ukraine
Click to expand...

They would, wouldn't they, Zelensky is somewhat of a posterboy at the moment, he can do no wrong, even if Russia was winning the media would say otherwise.
S

King Silkbeard said:
They would, wouldn't they, Zelensky is somewhat of a posterboy at the moment, he can do no wrong, even if Russia was winning the media would say otherwise.
Click to expand...

Has Russia's plan to decapitate Ukraine within 72 hours and replace its leadership with a pro-Moscow Government succeeded?

On the 24th of August the war will be 6 months old and not a single one of Putin's goals will have been achieved. His army is hopeless. His tanks and artillery is almost useless, his air force is largely grounded, and his Black Sea fleet can hardly move out of port as it is getting thwarted by a country that does not even have a navy and his Wagner group of mercenaries are just magnets for missiles. Citizens are fleeing the Crimea as ammo dumps and air bases just "blow-up" as the front line is now on their doorstep. If you want to leave on Friday, you had better leave right now as there is a 24 hour wait in a queue.

Imagine being a Russian tourist in Crimea? 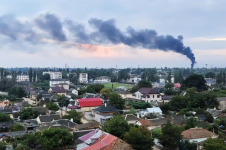 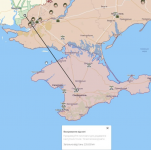 It’s been a few years now

We can look at it through the lenses of both sides.
It would be easy for Ukraine, they will win when they kick the Russian orcs out from their country and get occupied territories back under their control.

When Russia will win? Hard to say, as this 3-day-long operation is changing its principles week after week
What I would risk saying on Russian situation now:

MILITARY: Russia is losing, they are proven to not be close to being "second army of the world" anymore. They have lost so many personnel (US estimates around 80k people!), they are unable to replace officers, pilots, mechanics and other specialists, they are unable to replace the regular cannon fodders even with mercenaries, foreigners, prisoners and other scumbagz. They are chasing people in conscription age to force them to join so-called republics. They militarized fire service, police, other services... They have lost most of their capabilities for air, missile attacks, their huge artillery is already used (barrels worn and no capabilities to replace), they have no ammo (they use ancient rounds), the fancy technika they were so proud of is crap and their contracts are being cancelled one after another, their their logisitcs do not exist. If that would be an online strategy game, the "emo quit" would be the best solution here.

ECONOMICS: Russia LOST. No matter how the conflict will end, Russian economy does not exist anymore, sanctions are just actually kicking-in and already made havoc in Russia. Car manufacturers - over 90% down, they must strip the planes to look for replacements, they cannot even manufacture white paper, they are short on medicine, no electronics, no components to use in business, they lost manufacturing capabilities so badly, that they are unable to get production up as those orcs cannot even manufacure the machinery and tools they are using. Russia in recent months went back at least 40 years in their growth.

GEOPOLITICS: Russia LOST. Their position as a leader in this part of the world does not exist anymore. They are excluded from most of international organizations, they have problems in UN even. They are pariah state in that term, no one is willing to have anything to do with them, only some totally rogue countries are making business openly with them as no one else would (like Syria or North Korea). They lost any credibility when it comes to international agreements and are close to be openly named as a terrorist state globally. They will not be able to regain their position this century or maybe ever (fingers crossed).
They lost their project of former soviet states, main players from Central Asia are seeking options to eliminate Russia and deal with the West (and China) on their own.
They absolutely lost as a supplier of weapons to third world countries. All their mask of being civilized country is in pieces.

EUROPEAN AFFAIRS: Russia LOST. Even their ally Hungary is now singing a different song. They can count on such titan in Europe as Serbia and that is all. They pushed Sweden and Finland to join NATO. Ukraine, Georgia and Moldova are next in queue, even stronger than before the conflict. So-called Eastern Flank NATO agenda is being at last listened to. Sanctions and other restrictions are openly applied. They totally failed to crush European unity and their strongest ally Germans, are now totally gone as a leader for the EU - no one will listen to them anymore. They managed to get UK closer to the EU after brexit - well done! The works on eliminating Russia from Europe sped up - fencing in place, no special rights to Russian citizens, Baltic states are starting to clean up the Soviet left overs (including Russians living there and refusing accepting citizenship - you can have Russian passport or none, Russia doesnt accept dual citizenship). The stick called "refugees" does not work on anyone anymore and is clearly seen as stage hybrid war.

FUELS: Russia LOST. The attempts to blackmail Europe - the main importer of their fuels failed big time. In a very short time EU was able to secure most of the new sources, get the projects running and prepare to switch. Russian export of fuels to EU collapsed actually. This resulted in huge gap in the Russian budget. It is so bad for Russians that they burn oil and gas on the fields as they are unable to ship more and do not want to close the installations (they actually cannot afford that due to lack of technology to reopen). EU changed their mind on nuclear power, so all Russian attempts with use of so-called eco-organizations failed miserably and will not help Russia getting hegemony here.

SOCIAL MEDIA/PR: Russia LOST TOTALLY. Their propaganda outlets are banned in most of the countries, they have no power to brain wash the regular society members, only schizophrenic, paranoid conspiracy theories fans and simple idiots are getting caught in their propaganda. The usual Russian trolls are crying loud not getting monies and being ostracized. Ukraine at start of the conflict employed pro PR agencies to help and this worked. Russia is not capable to adapt, they are simple folk, they were bred and raised to obey, not to think.

INTERNAL AFFAIRS: Russia in trouble. More and more voices of opposition are raised. Some republics already openly claiming their rights against the might Russia (Dagestan for example). The special services FSB and GRU have actual war between themselves. They are changing leaders like gloves. No one wants to take responsibility and Russian society is simply sticking to survive the terror (nothing new). There are plenty of acts of sabotage in Russia. They have lost over a million of young skilled and educated workforce this year! The way they mobilize the people (hidden conscription) is only a start of their problems, the majority of loses are not Russian-ethnic... They sending to death only minorities. Russian oligarchs are pissed too, they are losing billions and there is no mercy from the West. Long topic really They lost religious influence over Ukraine. The support for Russia in Ukraine does not exist anymore.

OVERALL: Russia has played their cards but miscalculated big time, they will suffer from it for decades. This war will be for a year or two longer. Russia may get to the table and get some peanuts (like part of Donbas maybe, only maybe) but I pretty doubt as everyone sees that the king is naked. So there is no definite winner/loser for the whole conflict - this will be delivered with time unfortunately.

On a contrary, despite massive loses Ukraine suffered, they already won on many levels.