Is this 'Bitcoin' the real deal?

I would disagree.
T

Degiro has been down all morning

What a fawking joke

The mid 70s are angry and want their startup back
D

Though it was actually mid 2000s that it really started to take off again, first with the ipod, then the iPhone.

Nokia really missed the boat on that one, they thought it was just an ipod with added phone, only teenagers will want one.
H

Though it was actually mid 2000s that it really started to take off again, first with the ipod, then the iPhone.

Nokia really missed the boat on that one, they thought it was just an ipod with added phone, only teenagers will want one.
Click to expand...

Yes and no.
Having both directly worked for, and as a supplier to, Nokia, would like to think I've a pretty close insight.

Nokia had the touch Series 90, launched a bunch of phones on it too:

With the 7710 Nokia has created a jack of all trades, but is it a master of any of them?

www.trustedreviews.com
Merging Series 60 and Series 90 was a mistake...

Nokia were pushing the idea of phones as pocket computers for a long time. I recall installing an app to turn the Nokia 7650 infra red sensor into a remote control in 2002.

The initial iPhone looked good but was a terrible phone. When it launched in 2007, it only did 2G, had shit battery life, a shit camera (it couldn't send picture messages anyway), terrible antenna and didn't install apps. It did have a capacitive screen though, which industry was very skeptical about. I did a test with a capacitive phone screen in 2005 and it was a complete car crash.

On the other side in 2007, the company I was working for at the time had a working 4G phone in R&D, and Nokia had the N95 with a cracking camera, 3.5G and decent battery life with plenty apps available.

Symbian was a dog to develop for. Nokia had a Linux option, Meego or Maemo, which was actually pretty good, launched in a few really good phones (e.g. N8/N9) and Jolla showed, by turning it into Sailfish, that it could be compatible with Android too.

And Apple got much better relatively quickly.

But then Stephen Elop set the whole lot on fire with his disaster of a move to Microsoft.
D

The lead designer who had been there a long time quit during that time as well.
H

doppellanger said:
By the time Elop came in in 2010, it was already too late.

The lead designer who had been there a long time quit during that time as well.
Click to expand...

It was still Nokia's to lose.

I actually think cocking up the Trolltech acquisition and integration was the biggest misstep before the Elop brainfart. That Burning Platform memo must be one of the dumbest moves in corporate history. 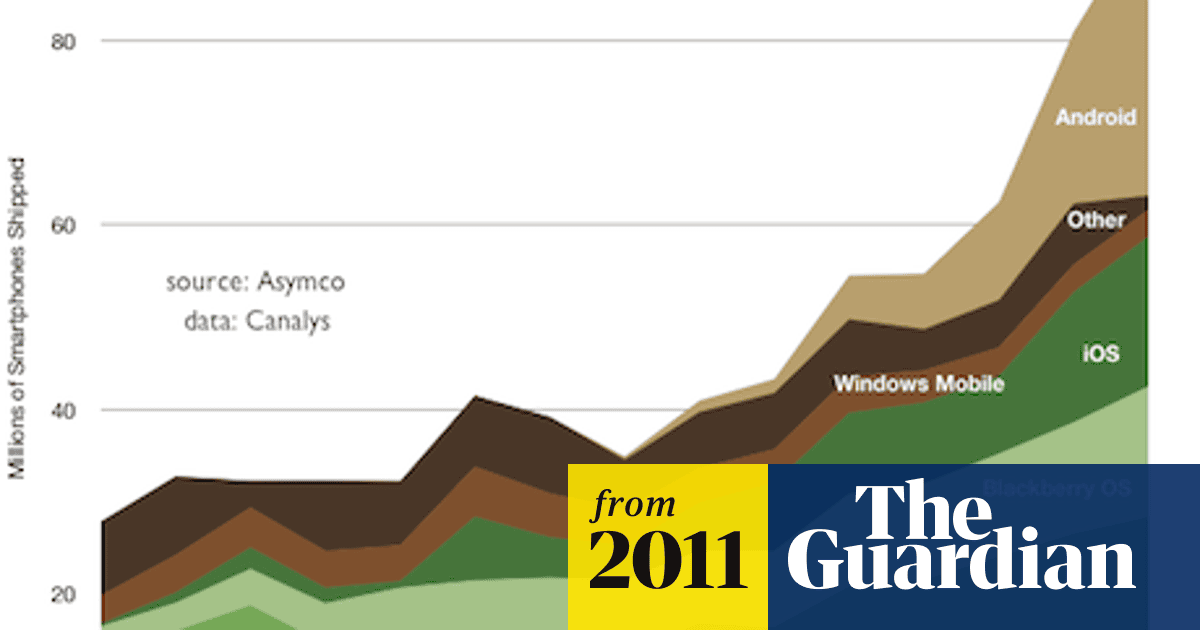 Nokia's chief executive to staff: 'we are standing on a burning platform'

He wasn't wrong per-se, but it's a stupid move to actually pour petrol on your platform to make it burn much, much faster. Announcing the end of your existing main platform without a first shot at replacement (which needed a lot of improvement) available for 8 months was a worse follow up.
And then Microsoft pisses off developers and early adopters by breaking backwards compatibility.
Twice.

It was still Nokia's to lose.
Click to expand...

Ya Symbian was a hopeless OS followed closely by JME.
D

It was still Nokia's to lose.
Click to expand...

I would disagree and so would the share price. 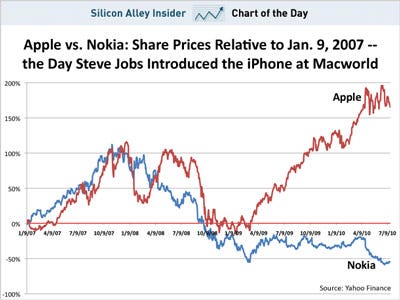 CHART OF THE DAY: The Tale Of Two Smartphone Companies

Apple and Android had all the momentum at that point. 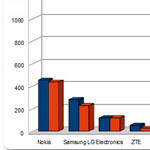 It's not over until it's over and 2010 finished just days ago if you ask the cell phone manufacturers. Or rather – their financial results for the year. Now, as all of them have reported their yearly results it is time to take a look at their standings and all the (un)kept promises for the past...

The other companies had better product pipelines at that stage, and that's something that was not going to be easy to turnaround, and that's what Elop tries to do with the MS tie up.

I had one of those Nokia Windows phones and I thought it was actually pretty good. There was surprisingly little bloatware. I was surprised when they killed off that platform. Last time I checked, the Nokia Maps app still works on the phone but virtually nothing else does

sigourney's knickers said:
Ya Symbian was a hopeless OS followed closely by JME.
Click to expand...

It had miles better battery life and hardware integration.
Absolute dog to develop for, hence QT