The Glen Drama Theatre Group Banteer presents The Cause, an original and new work by a native son. Written by Seán O’Deadaigh, based on an adaptation of his screenplay Cause to Kill, The Cause is centred on the burning of Cork City in 1920.

The Cause is our story, our struggle – the birth of a nation from the ashes of a city.

The Cause is the dramatic telling of the days surrounding the single greatest atrocity of our War of Independence, the burning of Cork City, December 1920.

The plot revolves around the capture of a British Officer, Spencer Chapman, World War 1 veteran and member of the Auxiliary Division of the Royal Irish Constabulary. His captors are members of Cork No.1 Brigade, Irish Revolutionary Army Captain Seán O’Donoghue and Volunteer Jamesy O’Mahoney. Over the course of the play personal histories and motives are woven into the relationships of the three soldiers. The clash of culture and ideology mixed with rage and passion makes for a potent mix of history and politics.

the outside is brought by Cumann na mBan members, Peggy Duggan and Katie (Birdie) Conway, and their stories heighten the tension amongst the men. The terrible toll that war and killing exacts is captured poignantly in Katie singing “Blood on My Hands”. With time running out for the British Officer Chapman, news of a further atrocity in West Cork reveals a hidden dark secret that seals his fate.

The play will feature an original score composed by Peter O’Sullivan.

This play is dedicated to the memory and legacy of Terence Mac Swiney 1879-1920. 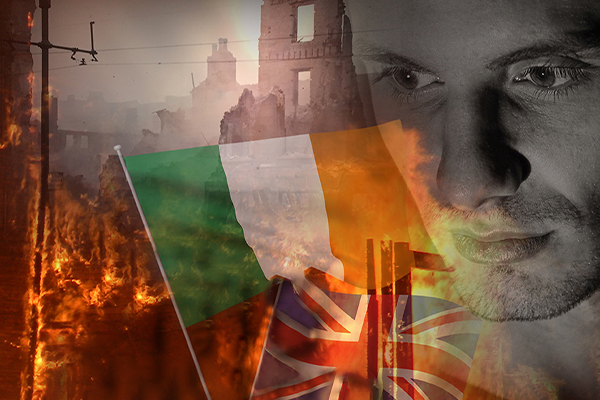