Comprised of vocalist Katie Ball, guitarists David Noonan (also backing vox) and Mete Kalyon, bassist Rob Clarke and drummer Shane Maguire, Just Mustard have been steadily building a reputation as one of Ireland’s most thrilling new bands -live and on record -since forming in 2016. Newly signed to Partisan Records, the home of Idles, Fontaines DC and Cigarettes After Sex, Just Mustard have been working on their second record, their first for the label and are set to share more information on the release in the coming months.

The Dundalk band’s heady blend of noise, trip hop and electronic influenced music earned their debut album Wednesday huge acclaim in their native Ireland in 2018 -including a Choice Music Prize nomination for Irish Album of the Year. NME dubbed their debut “a two-toned masterpiece” and the Irish Independent described it as“a swirling atmosphere-heavy thrill-ride”. Earlier this year, the band made their first major strides internationally with the AA side ‘Frank//October’, gathering acclaim outside of Ireland;

KEXP made ‘Frank’ their ‘Song Of The Day’, BBC Radio 1 named it ‘Tune Of The Week’, The FADER offered up the premiere of the song’s video and ‘October’ drew the acclaim of Stereogum.

This momentum carried through to live, with the band supporting Fontaines DC on their sold out UK tour, emerging as a ‘band of the weekend’ at Brighton’s Great Escape Festival -The Independent (“worth waiting for”), Dork (“unforgettable”), DIY (“a monstrous wall of sound”), Gigwise (“cinematic at every turn”) and Loud And Quiet (“distinctly fixating and eerie”) -and coming out of Primavera as one of the “12 best acts” according to NME. Just Mustard were handpicked by Robert Smith to support The Cure at Malahide Castle and their electrifying live show also earned them bookings across leading summer festivals Green Man and Electric Picnic. 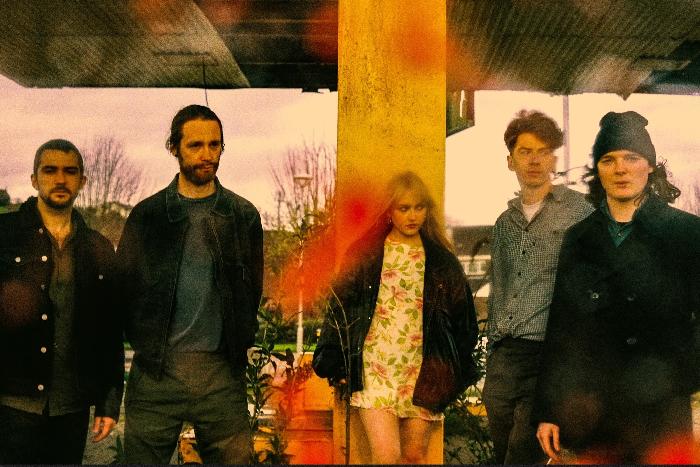