From the beginning the band have always adopted a successful two strand approach playing a top quality covers set on one hand, while separately writing, recording and releasing self penned material on the other.

Having played many countries including United Arab Emirates, USA, Holland, Germany, Bahrain, England, Switzerland, Sweden and beyond, then include several successful charting singles its fair to say that the band have never been shy when it comes to hard work allowing them to showcase and perform their original material in some of the most famous venues in the world such as Arlene's Grocery in lower east side Manhatten, London's infamous Marquee club and right up to Dublin’s 02 Arena supporting Joe Satriani. With over 25 years hard work and experience under their belts the band is always evolving and moving forward. 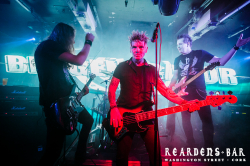