‘Why Are You Leaving Cork?’ - New Sanity Checks at Ferry and Airport Terminals 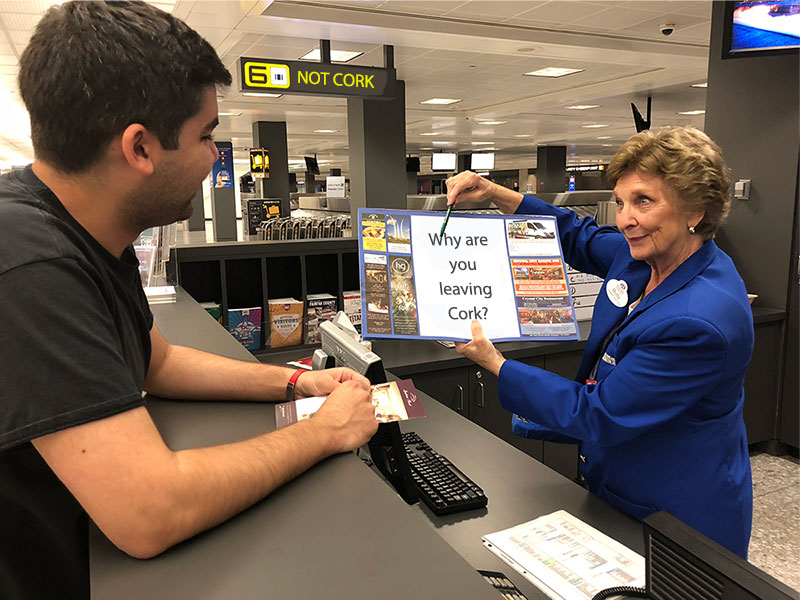 It’s not only pride that keeps many Corkonians from straying outside the county when booking their summer holidays these days – on the back of nearly a decade of soaring tourist numbers, Cork has never been more attractive as a holiday destination. The city and county are packed with amazing things to do, superb places to stay, beautiful scenery and charming, friendly people. If we do say so ourselves.

By holidaying inside the People’s Republic you also significantly reduce your carbon footprint by not travelling far – especially if you get on a gas guzzling, environmental terrorising airplane or a thirty year old car ferry blowing black smoke out of its funnels that makes the emissions from the train to Dublin seem like a few puffs from an e-cigarette.

Here lah: A typical 737 that travels from Cork to and back from somewhere about 2 hours away burns about 12,000 litres of jet fuel which is about 0.8 tonnes of carbon dioxide per passenger whereas a return journey to the amazing Beara Peninsula from Cork City only results in 0.05 tonnes.

So basically, if you skipped the maths, the message is that anyone who leaves Cork to go on holidays is a terrorist. An environmental one, at least.

The biggest selling point to staying in Cork for your holidays is not that you don’t have to drown cute baby polar bears by melting their favourite Greenland glaciers, or personally make rare Siberian tigers extinct, but that you get to stay in Cork. Which do be daycint.

Cork Airport and the port in Ringaskiddy have both refused to accept the PROC’s (very reasonable) proposal to setup a check point before the security screening area that interrogates, sorry eh, “politely asks”, Corkonians getting on flights and ferry sailings why they are leaving Cork.

Of course, there are legitimate reasons one might want to leave Cork. We can’t think of any right now, but in fairness, they probably do exist. What’s far easier to think of are reasons not to leave Cork and this is what the additional airport screening process ought to be about.

This shouldn’t be seen as an attempt to set up a sort of soviet-era dictatorship that doesn’t allow its citizens to travel abroad – this is not trying to rebrand Cork as ‘North Korea with hurling’.

Let’s be clear. No Cork passenger should be refused permissions to leave Cork - that would require significant changes to the constitution and at least three days of back-to-back hysteria on Neil Prendeville’s show. And nobody wants that.

Instead, the guilt trip should be laid on something savage if the reason for leaving Cork is deemed to be unacceptable to the officer on duty.

Each passenger should first present their boarding card and passport for examination and then face some questioning by highly trained, super-sound Corkonians – we’re thinking pure, salt-of-the-earth, Cork mams here - the type that you’d instantly feel bad about getting on the wrong side of.

“I’m going to go whale watching off the coast of South Africa”
“Ah for God sake. Sure, why are you going there when could have done an unreal trip from Union Hall to see the same thing?”

“I’m off to Boston to catch a baseball game between the Red Socks and the Giants”
“I’ll give you red socks! Do you know Cork are playing Limerick in the Páirc on Sunday? Aren’t the your own county’s socks red enough for you?”

“The weather’s desperate at home. I just want to get some sun!”
“So, you want to commit environmental terrorism and force pacific islanders to leave their homes, all so you can get a bit of a tan, is it?”


Visitors to Cork are another matter entirely and they need to be encouraged to come here, but don’t think for one second that this PROC policy of screening Corkonians going abroad but not incoming tourists is hypocritical.

In fact, from an environmental point of view, the more Corkonians that holiday in Cork, the more ‘carbon credits’ can be allocated to visitors who want to come and visit here (We can pitch it as ‘A Corkonian is staying at home, so you don’t have to’).

And with so few of its citizens taking flights and ferries abroad it will put the People’s Republic top of the green league too so it’s win-win all round.

So, the simple question for Corkonians is, are you holidaying in Cork this year or, are you an environmental terrorist?